Another ethics question against U.S. Rep. Alan Grayson made the rounds in the U.S. Office of Congressional Ethics, this time inquiring whether the Orlando congressman used his official office for campaign statements, according to a tweet from a New York Times reporter.

Grayson’s staff contends that there is no new ethics concern, nothing new that the Office of Congressional Ethics was concerned about, and that any reports of a new investigation are wrong.

Eric Lipton, who has been covering Grayson for The Times, had posted on Twitter an email exchange Monday that he had with Grayson’s Congressional Communication Director Ken Scudder about someone who had filed a complaint involving Grayson’s July 13th interviews discussing his candidacy. In the exchange, Scudder said it involved a claim filed by a political opponent and was without merit.

Lipton did not report the exchange in his New York Times pieces.

The email exchange made it sound as if there may be a new Congressional ethics investigation, about the July 13th interviews, that would be in addition to the ethics inquiry underway in Congress regarding Grayson’s use of hedge funds he had named for himself.

Murphy’s campaign released a copy Wednesday of the original tweet with the email exchange, and declaring, “A second investigation has been opened by Congressional Ethics authorities into Alan Grayson’s ‘improper use of his official office.'”

But Scudder insisted Wednesday that there was no second complaint and no second investigation, and that all that had happened was that questions about the July 13th interviews were raised and answered during the investigation of the hedge funds complaint.

Lipton confirmed that to be his understanding Wednesday. He took down the original tweet with the email exchange and replaced it with one “to clarify.” He explained in an email to FloridaPolitics.com: “I reposted the tweet to make clear that there is a second line of questions. Not necessarily a second investigation.” 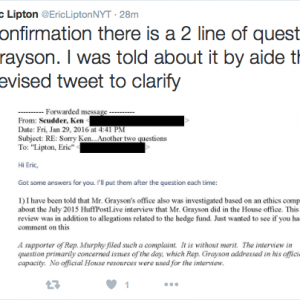 Murphy’s campaign saw an opening, based on the interpretation of Lipton’s original tweet that there may be a second ethics investigation now.

“Alan Grayson is facing yet another ethics investigation into his reckless and unethical behavior as a Congressman,” Murphy campaign spokesman Joshua Karp stated in a news release issued Wednesday. “Taxpayers have a right to know that their money will not be spent on a self-obsessed politician’s unethical hedge fund or his campaign for higher office. This is why Floridians just don’t trust Alan Grayson.”

Scudder replied that questions about the office interviews were raised in the press and answered many months ago, and did not develop into a new inquiry.

“This is wrong. There is only one investigation,” Scudder stated in an email to FloridaPolitics.com. “In the course of that investigation questions were asked about those interviews, which have already been written about.”