If you want to be among the first people to experience Star Wars: Galaxy’s Edge, you better book a flight to California.

Disney announced on its blog that the Star Wars-themed expansion will hold its “opening season” at Disneyland in the summer of 2019. At Disney’s Hollywood Studios, it won’t open until late fall 2019.

The fact that Disneyland’s version of Galaxy’s Edge would open first had been confirmed by Disney earlier this year, though the company has now narrowed down when in 2019 the new areas will welcome guests.

While the construction projects started at roughly the same time on opposite coasts, there was more existing infrastructure to clear out in the site at Disney’s Hollywood Studios. The Florida version of Galaxy’s Edge will sit on land once occupied by the Studio Backlot Tour, the Lights, Motors, Action! stunt show and the Honey, I Shrunk the Kids: Movie Set Adventure, along with the former Streets of America section.

Disneyland’s site clearing was no picnic either. That park’s railroad and Rivers of America section had to be temporarily closed and reconfigured but it’s also absorbing a greater amount of former backstage areas than the Disney World construction.

When they open, the Disneyland and Walt Disney World versions of Star Wars: Galaxy’s Edge will each have two rides: one featuring a battle between the Resistance and the First Order from the more recent Star Wars movies and another where guests pilot the Millennium Falcon. Disney’s Hollywood Studios will have an exclusive perk once a planned Star Wars-themed hotel opens next to the park. 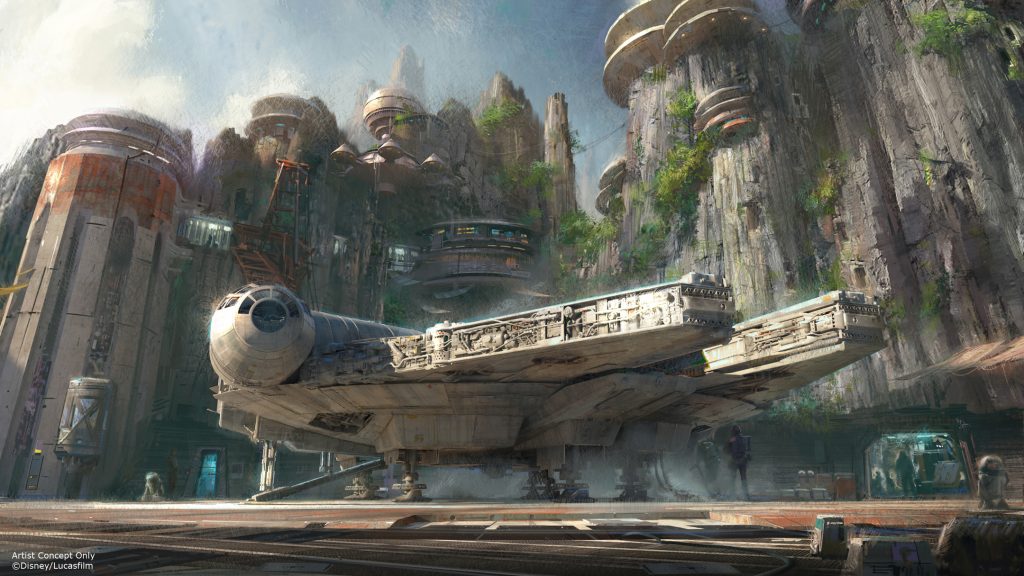