DISCLOSURE: This review is based on my own opinion and perspective. I paid for my hotel room. Universal did not grant me any special access to the resort and I received no special treatment from hotel employees, who were not aware that I was conducting a review.

Universal Orlando is invading International Drive with the first phase of its Endless Summer Resort. Judging by my stay, the surrounding off-site hotels have something to worry about, even if the overall experience is below that offered at other Universal accommodations.

Debuting in June, Universal’s Endless Summer Resort – Surfside Inn & Suites (trying saying that a few times fast) is the first in the resort’s “value” category and its seventh on-site hotel overall. It’s also the first physically separated from the rest of Universal, being located on the former Wet ‘n Wild site at the corner of I-Drive and Universal Boulevard. 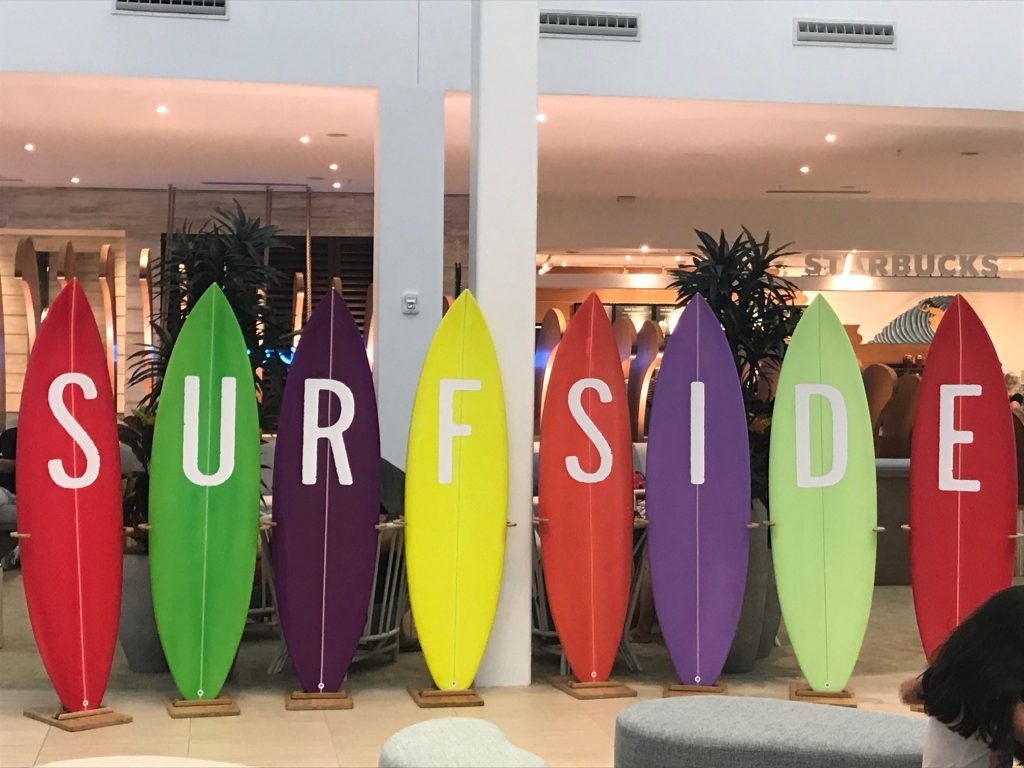 The surf theme is hard to miss (Orlando Rising)

My initial impression was the hotel did not scream “value resort.” Unlike Disney World’s value category, with its thousands of rooms, all with outdoor entry, spread out over vast distances, Surfside Inn & Suites is all interior-entry rooms, split between two towers that extend from a centralized lobby. The surf-themed lobby itself, with its ample seating and phone charging stations, felt much more relaxed than, say, an All-Star Resort teeming with cheerleading groups.

Having team members posing with longboards and greeting guests, however, was a bit much. I know I’m nowhere near a beach.

I chose a standard room with a pool view. At 313 square feet, the rooms just barely beat Cabana Bay Beach Resort’s standard room size and have quite a similar layout with two queen beds and a separate bathroom and vanity. Rather than a standalone shower, the room features a standard shower/tub combination, with serviceable water pressure — not quite as nice as recently updated rooms at Disney’s values.

Beyond more surf-themed decor, two features of the room stand out. One are the number of hooks available, I’m assuming as a way to keep small bags off the floor. The other is the choice for the power outlets. While it’s now common practice for theme park hotels to feature USB outlets, Surfside Inn traded in some of the regular USB slots for the newer USB-C ports. Perhaps this is some forward-thinking move that will seem genius if the next iPhone forces us all to buy USB-C cables. 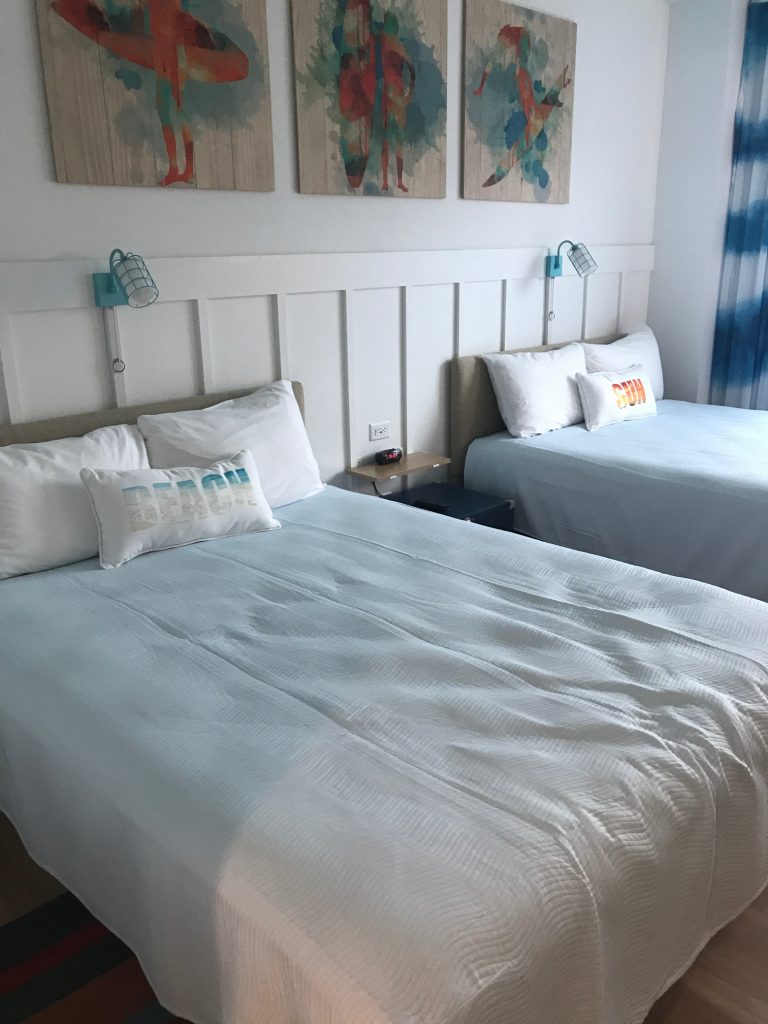 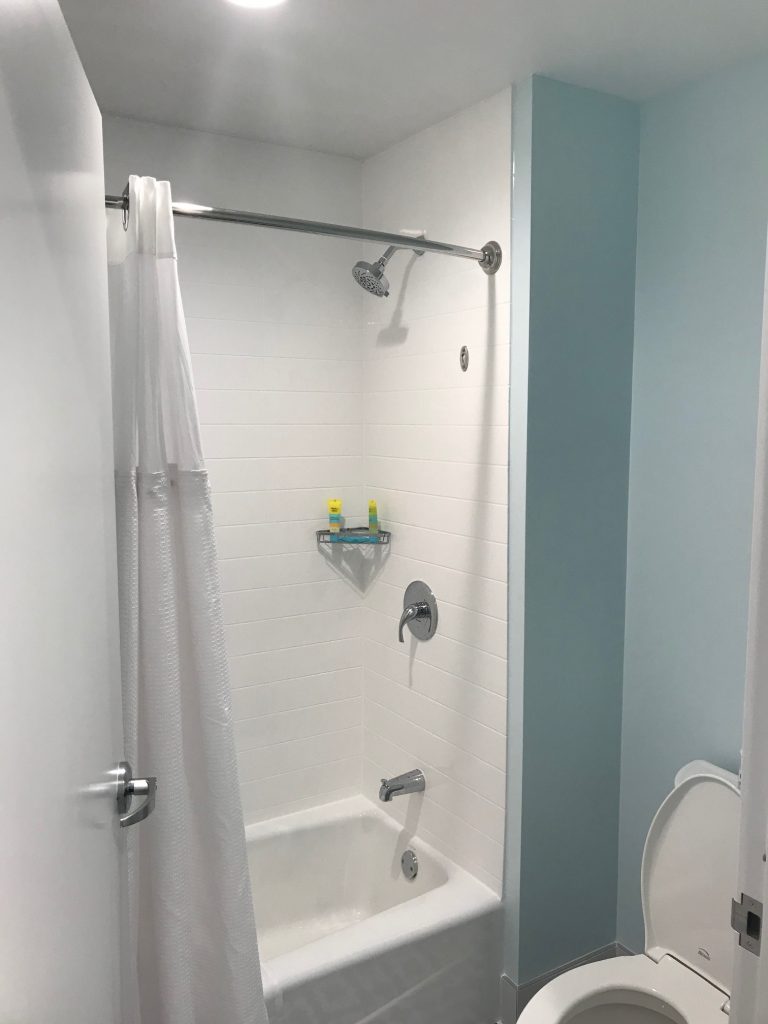 Not as nice as Cabana Bay showers (Orlando Rising)

There’s not much of a workspace to speak of, though the small area in front of the TV could do in a pinch. Otherwise, the room is fairly standard, right down to the beds and pillows. Like many theme park hotels, these beds will be fine for a few nights of sleep after exhausting yourself at the parks, but you’ll miss your higher-quality mattress at home.

Being a 750-room hotel, Surfside Inn & Suites doesn’t need the number of food options (or dining space) as Cabana Bay. You’re therefore limited to three options: the obligatory Starbucks in the lobby, drinks at the poolside Sand Bar and the hotel’s food court, the Beach Break Cafe. 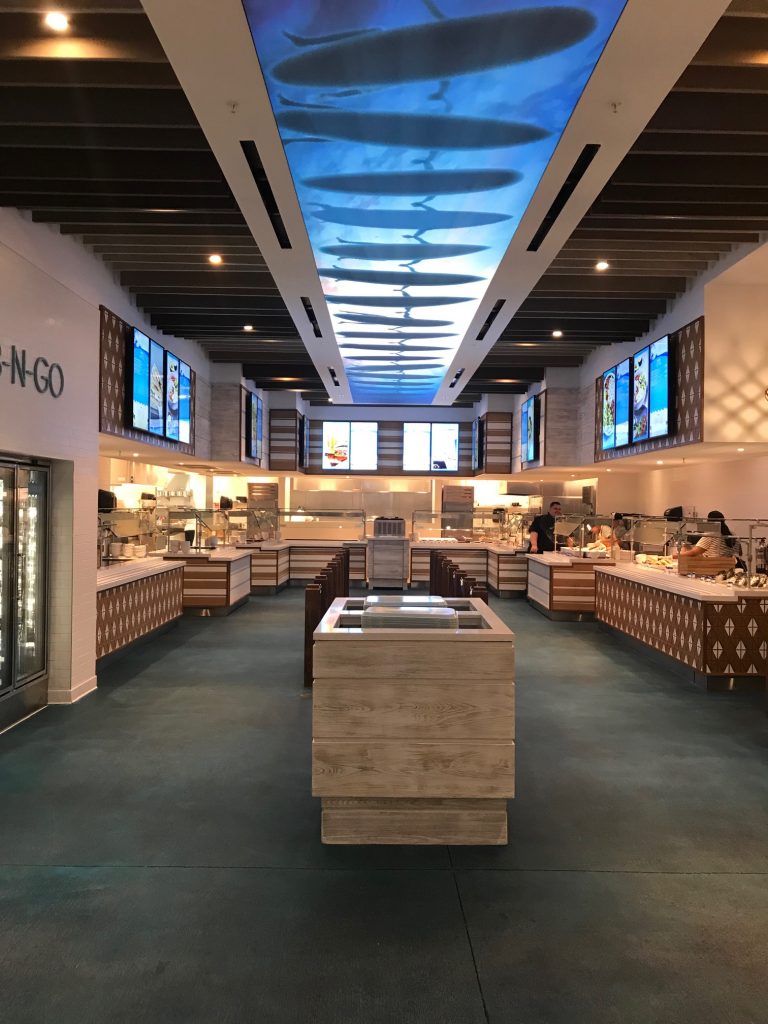 I’d rather try to assess the overall quality and value than attempt to play a food critic. When it comes to value, Beach Break Cafe appears to have that in spades. Prices are noticeably lower than Disney food court— I was pleasantly surprised a bottled water cost only $2.50 — for a much larger serving.

Quantity doesn’t equal quality, of course, and the downside is most of the food appeared to have been sitting under heat lamps for quite a while. This would be a helpful reminder to Universal that the I-Drive competition goes both ways; it would have been easy for me to leave Endless Summer and go grab some fast food across the street, so skimping on freshness at Beach Break Cafe won’t do them many favors.

Having a Starbucks in the lobby, however, remains one of my favorite features of Universal’s on-site hotels. It will undoubtedly save you from long lines at the CityWalk or in-park locations when you’re trying to rope drop and need your Starbucks fix. The staff at the Surfside location moved especially quickly, perhaps because there just aren’t as many guests to serve compared to Cabana Bay Beach Resort.

The main draw of any theme park hotel is the pool. For Surfside, the center of attention is its spacious, supposedly surfboard-shaped pool (I say it’s more like a fish). Unlike other Universal hotels, there’s no water slide or many extras at all around the pool area besides lounge chairs. 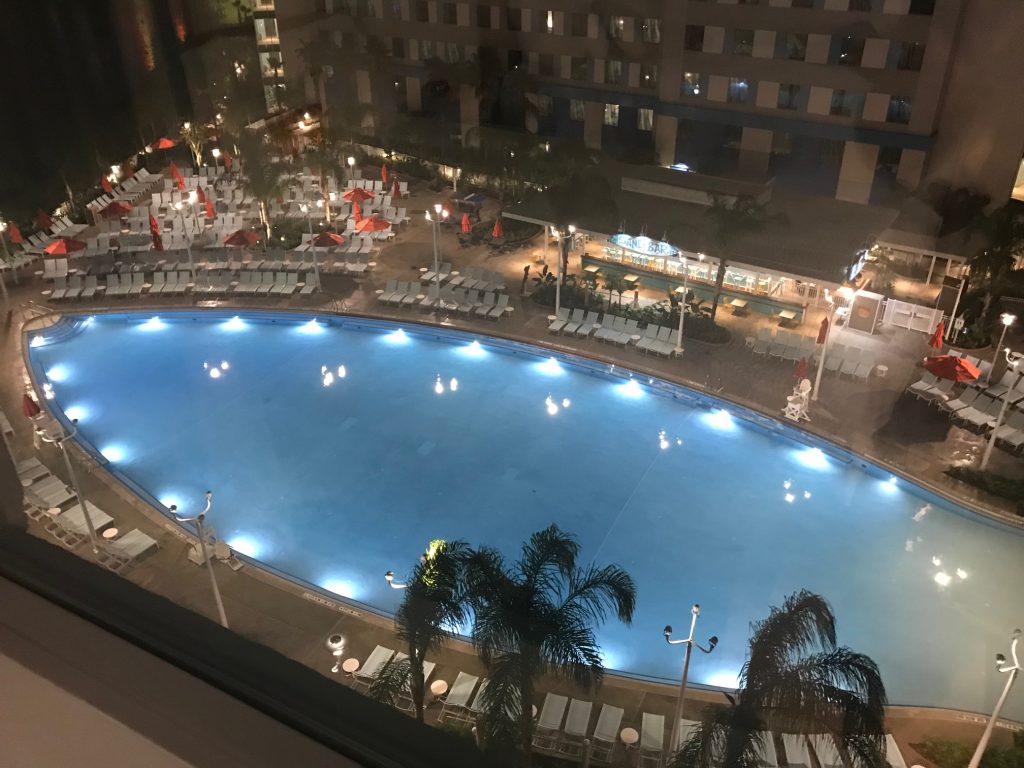 Looking down at the Surfside Inn pool (Orlando Rising)

Surfside does feature a fitness center along with an arcade. If you’re used to the large arcades at Disney World’s values, prepare for a disappointed. While the games are all relatively recent, there’s no more than a dozen machines at your disposal. 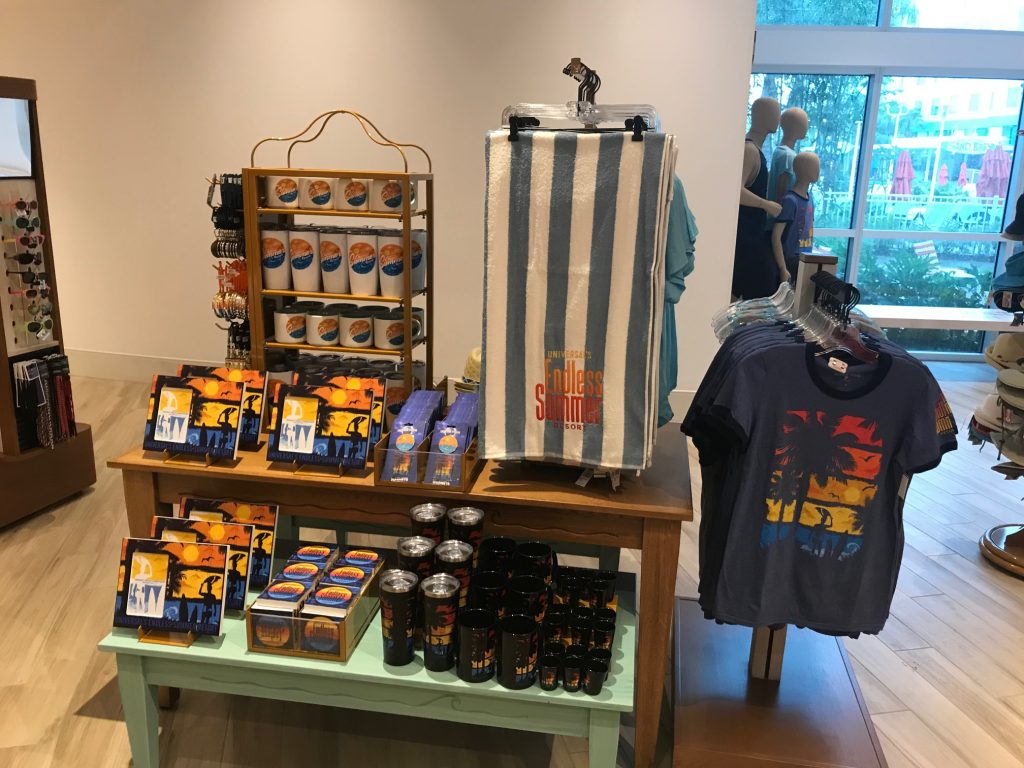 The lobby features the Universal Studios Store. Here you’ll find a selection of in-park merchandise along with a few racks of Endless Summer-specific items. Nothing says “Surfside Inn & Suites” specifically, which makes me think this hotel will share merchandise with the larger complex opening across the street in 2020.

In other areas, however, the “value” brand is evident, and not in a good way. Surfside Inn is the first Universal hotel where guests are not allowed to use other resorts’ pools. The ability to stay at Cabana Bay, but freely enjoy the pool at Portofino Bay set Universal’s on-site hotel experience apart from Disney World — where pool access is a fiercely protected privilege for guests of that specific resort.

Hotel employees seemed unaware this shuttle even existed elsewhere. Their suggested alternative was to take the bus to the CityWalk dropoff, walk to the resort boat dock and then take a boat to my desired hotel — not exactly an acceptable substitute.

The distance from the rest of Universal Orlando Resort does make a difference. Like Cabana Bay, complimentary shuttle buses run consistently between the hotel and the guest drop-off area at CityWalk, near the large security checkpoint. The actual bus ride doesn’t take much longer (about 7-8 minutes), but the bigger issue is how far you have to walk to get inside the parks. The trek from the drop-off point through CityWalk to the Islands of Adventure or Universal Studios Florida turnstiles usually takes another 10 minutes, perhaps longer if there’s a backup at security. 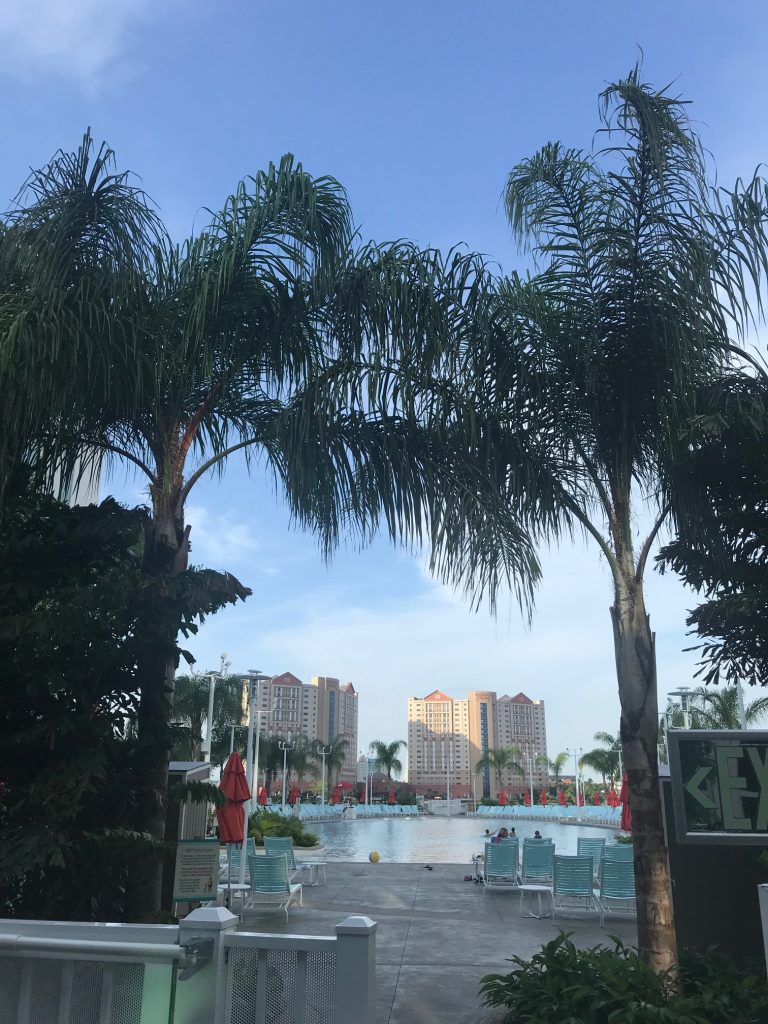 The biggest shortcoming, however, was the price I paid for my room. While Universal has promoted the hotel with rates as low as $73 per night, that’s based on a seven-night stay and the price can vary considerably based on demand. My visit, which came during a busy summer season and just a week after the hotel opened, cost $184 per night, a price that flirts with the low end of Disney World’s moderate resorts.

Simply put, this hotel isn’t worth $184 per night. It’s probably not worth more than $100 for a standard room and if the rate is within $20 of Cabana Bay, pay more for the better amenities.

But if your choice is between Universal’s newest hotel and a generic I-Drive resort, Endless Summer should offer enough of a step up in benefits and service to dip your toe in the world of on-site accomodations — that is, if the nightly rate is close to what Universal promises.