DISCLOSURE: This review is based on my own opinion and perspective. I paid for my own park tickets.  Universal did not grant me any special access to Islands of Adventure or Hagrid’s Magical Creatures Motorbike Adventure in order to conduct this review.

There’s no truly objective way to judge whether a long wait for any theme park ride is justified.

But no one seemed to be complaining about waiting hours in line as our coaster train on Hagrid’s Magical Creatures Motorbike Adventure pulled back into the station.

The newest addition to Universal Orlando’s Wizarding World of Harry Potter should be the resort’s crown jewel, the finest example of combining storytelling with roller coaster thrills Central Florida has ever seen. From expressive animatronics to jaw-dropping coaster tech, it’s the greatest ride Universal has ever built — and arguably better than Disney’s best. It should also silence critics of Universal’s largely screen-based additions over the past decade.

A great, new ride means a formidable wait, and Hagrid’s Magical Creatures has been testing the patience of diehard Potter fans. My own experience wasn’t so bad; after a midday break, I returned to Islands of Adventure around 6:30 p.m. as the attraction was reopening, with a posted wait of 120 minutes. By the time I trekked from Port of Entry to Hogsmeade, the ride was down again. Three further delays would follow during my time in line, but when I entered the queue at 6:50 p.m., the posted wait was 150 minutes.

The outdoor portion of the queue offers a fair amount of things to look at while also providing some natural cover from the Florida sun. Much of the queue layout remains from the former Dragon Challenge coasters, only with more switchbacks added behind Hagrid’s hut (the other side faces the Flight of the Hippogriff). 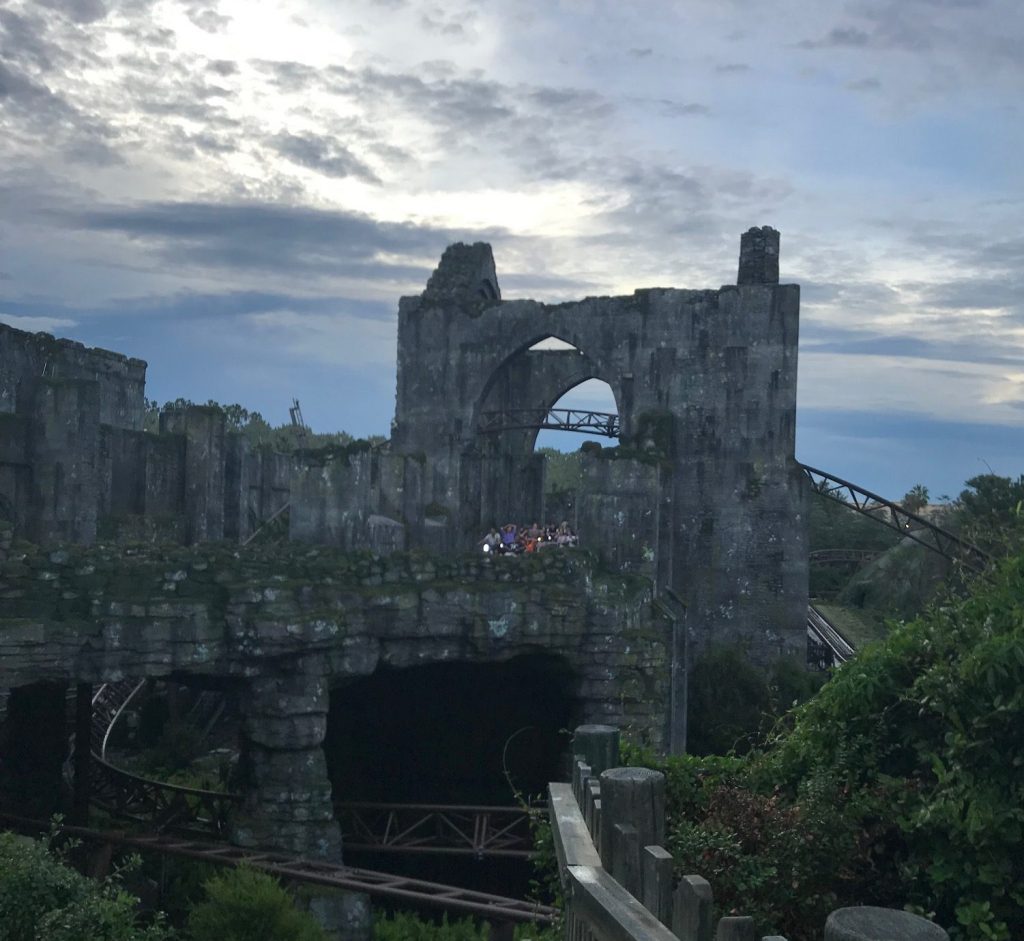 Much of the ride is visible from the queue (Orlando Rising)

This part of the exterior queue was also where a Universal team member allowed a few to enter the single-rider queue. It appeared they were allowing in only a few people at a time to the before roping it off again, and since I was genuinely riding on my own and eager to expedite my wait in any way possible, I sacrificed seeing the pre-show and much of the interior queue.

It did make for a shorter wait, but by no means did we move quickly. Upon entering the ancient ruins, I spent more than an hour in the same stairwell, with the single-rider line moving at a snail’s pace before entering the final room of the queue. I still ended up waiting just shy of two hours.

The ride vehicles feature two distinct seats, the motorbike and the sidecar. Single riders should be warned that nearly everyone in that line was being given the seemingly less desirable sidecar spot, though I was able to switch with another rider to get on the motorbike. The loading platform is a moving walkway, similar to Harry Potter and the Forbidden Journey and Hollywood Rip Ride Rockit. 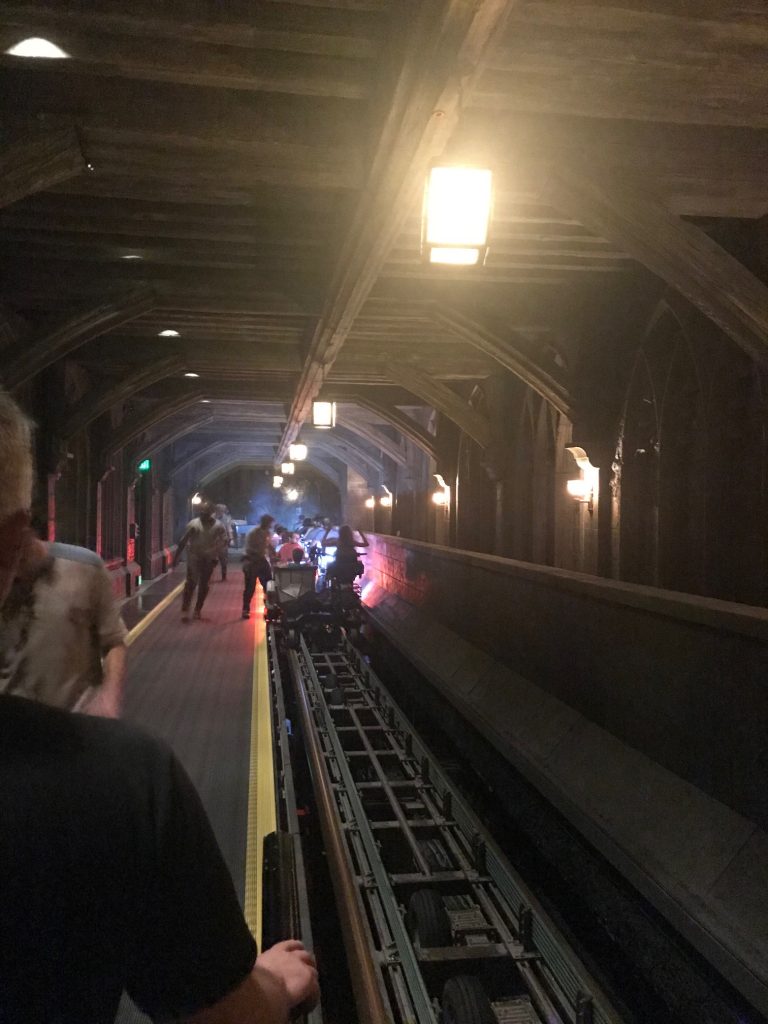 Once you turn the first corner from the loading platform, you’ll hit the first of seven launches whisking you away into the Forbidden Forest, with twists and turns through the ruins. Riding at night, with light provided by the motorbikes’ headlights, the amount of speed took me by surprise; I was expecting thrills along the lines of Seven Dwarfs Mine Train, and instead it felt more intense than Big Thunder Mountain Railroad, with the added sensation of feeling almost like I was steering the bike myself.

Following a short look at the Hagrid animatronic as he tries to control a Blast-Ended Skrewt, you’ll be launched again through the ruins with a series of banked turns before passing by Fluffy the three-headed dog and Arthur Weasley’s Flying Ford Anglia. 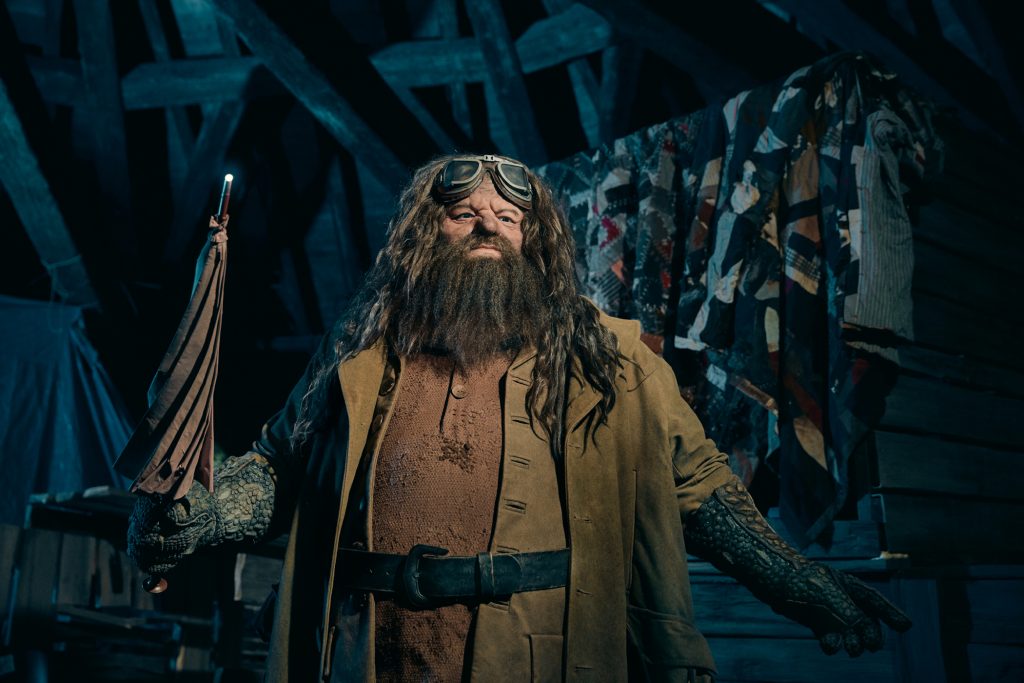 Now the high-tech nature of this coaster comes into play. The trains roll up a dead end, 70-degree angle hill before the ride continues backwards. Unlike the similar effect at Expedition Everest at Disney’s Animal Kingdom, there’s no pause as the coaster track changes behind you, sending the bikes into the darker reaches of the Forbidden Forest.

Passing a centaur, your vehicle becomes entangled in the plant known as Devil’s Snare from “Harry Potter and the Sorcerer’s Stone.” Just like Harry, Ron and Hermione, breaking from its grip means dropping down — literally. This is where the ride’s 17-foot free-fall drop occurs that elicited genuine cries of “How did that happen?!” from my fellow riders. (Universal has hyped Hagrid’s Magical Creatures as the first U.S. coaster to feature a free-fall vertical drop, though a similar effect has existed since 2012 on Verbolten at Busch Gardens Williamsburg.)

The ride ends with another launch and a few more turns before passing by two unicorn animatronics on the way back into the station.

The reaction from everyone on my coaster train really said it all: wide-eyed looks of disbelief, huge smiles, and many shouts of “That was totally worth the wait!”

I couldn’t agree more. Hagrid’s Magical Creatures Motorbike Adventure is unlike any other coaster experience you’ll find in Central Florida, including those that have sought to tell a story along the way. It provides greater thrills than Seven Dwarfs Mine Train or Big Thunder; better animatronics than Slinky Dog Dash; a more detailed environment than Revenge of the Mummy; and newer tech than Expedition Everest.

My criticisms are reserved solely to the ride’s unpredictable operations during its first month. While interruptions and technical difficulties have to be expected with new rides, Hagrid’s Magical Creatures saw more than usual, going down for hours every day (and on July 8, not opening at all). This led to anecdotal horror stories of guests waiting hours only to have the ride shut down and team members clear the queue, offering an one-time Express pass in return — hardly fair compensation, considering there’s no Express line offered for the Hagrid coaster.

Universal exacerbated the problem with its head-scratching decision to open the ride later in the day. While the extra maintenance time was surely needed, it also meant the ride was shuttered during generally rain-free mornings, with its few operating hours swallowed up by Central Florida’s near-daily summer afternoon showers. Perhaps Universal figured out this mistake, because the ride now has a more sensible schedule, opening with the rest of the park but closing hours earlier.

The other strange decision is how Universal has been handling the ride’s restrictions on body type. Officially, Universal advises guests with waistlines larger than 40 inches to try out a test seat for comfort. The problematic part is how and when this is done — by a team member (politely) suggesting to larger guests that they sit in the test seats in the final room before the loading station. It’s not hard to imagine a nasty confrontation when a Universal employee profiles a guest by body type and then tells them they can’t ride after waiting for more than two hours. Having guests test the seat before entering the queue would be better for both them and the team member.

All these operational difficulties should be temporary, and while I may have had a much easier time getting on Millennium Falcon: Smuggler’s Run at Disneyland this summer, the ride experience was nowhere near as enjoyable. For this coaster, I’d gladly wait another two hours to ride again.

Perhaps it will be dethroned by Disney’s Guardians of the Galaxy coaster being constructed at Epcot, but for now, Hagrid’s Magical Creatures Motorbike Adventure is the undisputed king of storytelling coaster.