DISCLOSURE: This review is based on my own opinion and perspective. I paid for my hotel room. Disney did not grant me any special access to the resort and I received no special treatment from hotel employees, who were not aware that I was conducting a review.

Disney World’s value resorts are getting some love after years of focus only on new deluxe and Disney Vacation Club accommodations. Sporting new rooms and new transportation to the parks, Disney’s Pop Century Resort retains its title as the best value on Disney property.

But there are still areas where the “value” feel is too obvious, to the determent of the guest experience.

The core theme of Pop Century remains the same despite recent upgrades: the resort celebrates pop culture in the latter half of the 20th century, with sections themed after each decade from the 1950s to ‘90s and decorated with pop icons and Disney characters from each era.

In fact, if you’ve visited Pop Century since it opened in December 2003, you’d be hard-pressed to know anything has changed until you got to your room.

From 2017 to 2018, each of the resort’s 2,880 rooms were extensively refurbished. Gone is the musty carpet and drab curtain separating the vanity from the bed area, replaced by queen-sized beds, laminate floors and in a first for the Disney values, a coffee maker.

The new rooms represent a huge improvement over the cheap, cramped feel of its predecessors. Keeping one bed tucked away in the wall really opens up the room if you’re only using one bed. For a family of three or four, it will still be tight, but at least the Murphy bed gives you the option of reallocating space during the day.

My favorite upgrade in the room is the shower. Featuring both a rainfall-style shower head and a detachable head — along with solid water pressure — this rivals the steamy shower experience you’ll get at Universal’s Prime Value hotels and beats out the newer Endless Summer Resort. 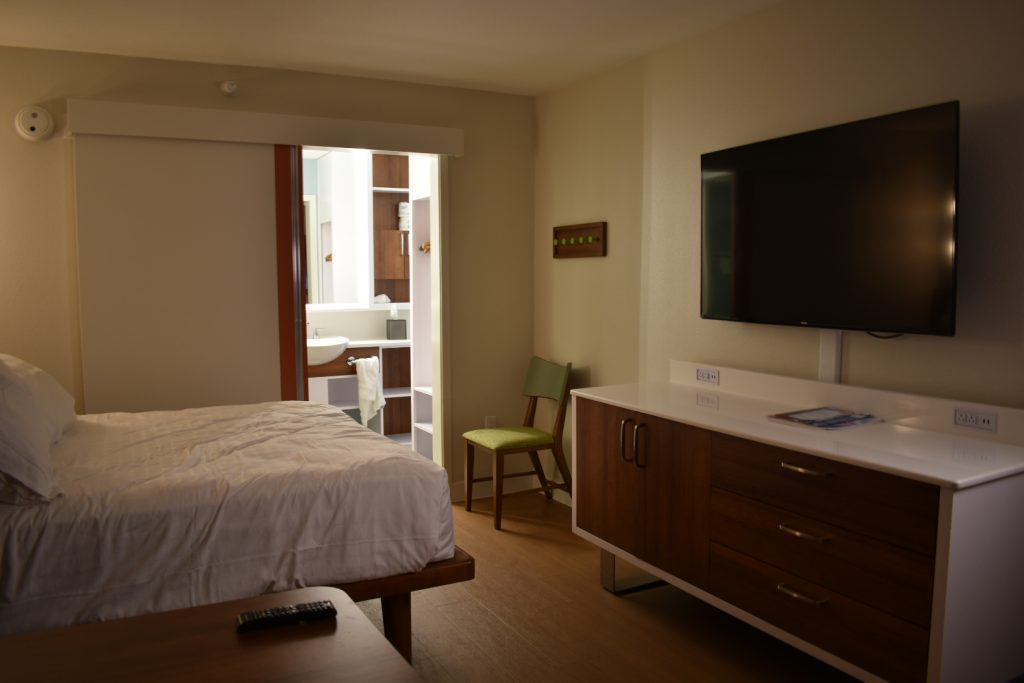 Other bloggers have criticized the lack of Disney touches in the room beyond some generic pop art above one bed and a mural you’ll find in the Murphy bed. Personally, I find the new design economic and tasteful; I don’t need the garish Art of Animation Resort designs with every square inch is referencing a Disney intellectual property. I need something functional, comfortable and clean, and the Pop Century refurbishment more than meets those criteria.

The biggest downside comes with the laminate flooring. While certainly preferable to the mildewy mess of the old carpet, it also means much more noise. Pop, like other Disney values, caters to families and large groups, and the laminate acts like an amplifier for those excitable kids and huge cheerleader troupes that frequent the resort.

The main dining option at Pop Century is found at Everything Pop Shopping & Dining, which combines both the typical gift shop and food court into one location.

If you’ve been to a Disney hotel food court, you know what to expect here: simple crowd pleasers like Mickey waffles, burgers, chicken nuggets, and take-out pizza, all overpriced and lacking freshness. You’ll eat here simply for the convenience and the crowds that develop at typical meal times will make you question just how much that convenience is worth. 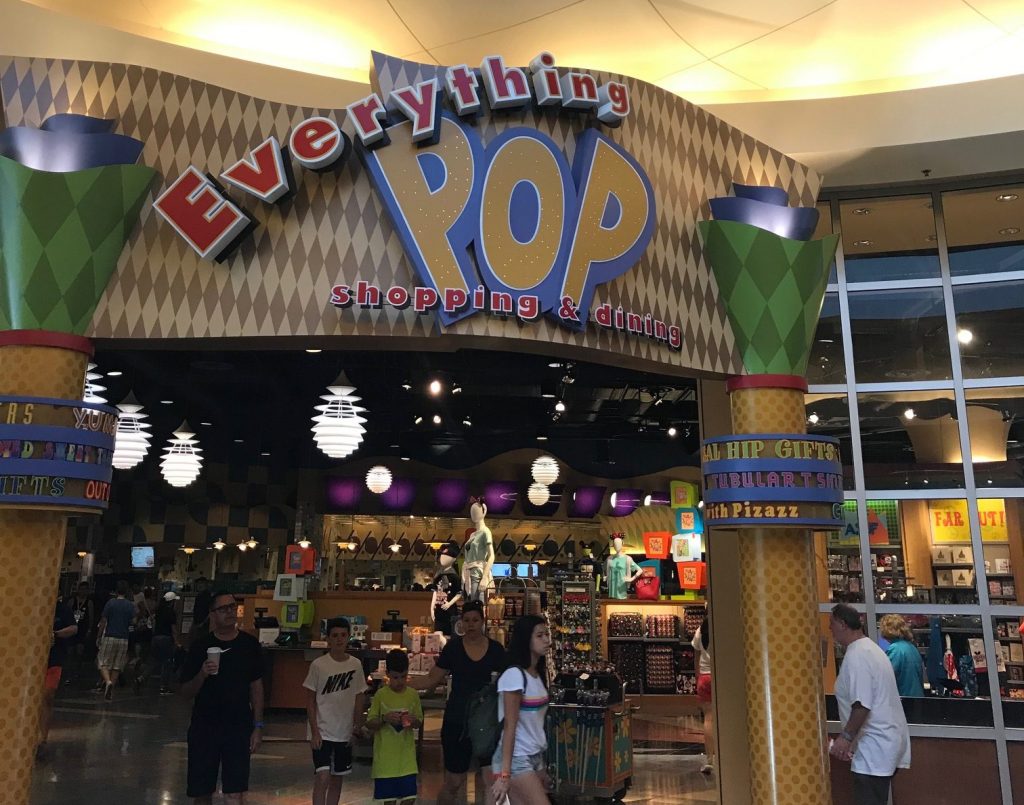 Like other Disney value resorts, the food court is where the hotel is at its weakest. Prices are steep — a bottle of Coke can cost $4.50 — and there’s an unshakeable feeling of being nickeled-and-dimed by one of the world’s richest companies. If Mickey Mouse had been present when I was forced to wait several minutes to refill a drink, all thanks to the RFID chip embedded in my soda cup, I may well have expected him to pick me up and attempt to shake any loose change from my pockets. In short: it feels like you’re being ripped off.

The best value provided at the food court is the surprisingly tasty pizza. While available for room delivery, I highly suggest taking the time to simply pick it up from the food court. With mobile ordering available, you can grab your pizza and be back at the room in less than half the time Disney will take to bring it to your door, all without having to pay an 18 percent gratuity and $3 room delivery charge.

The sprawling grounds of Pop Century sport three pools. Two are considered “quiet pools:” the bowling pin-shaped pool in the 1950s section and the computer pool near the ‘90s buildings. The feature pool, just outside the Classic Hall, is called the Hippy Dippy Pool. 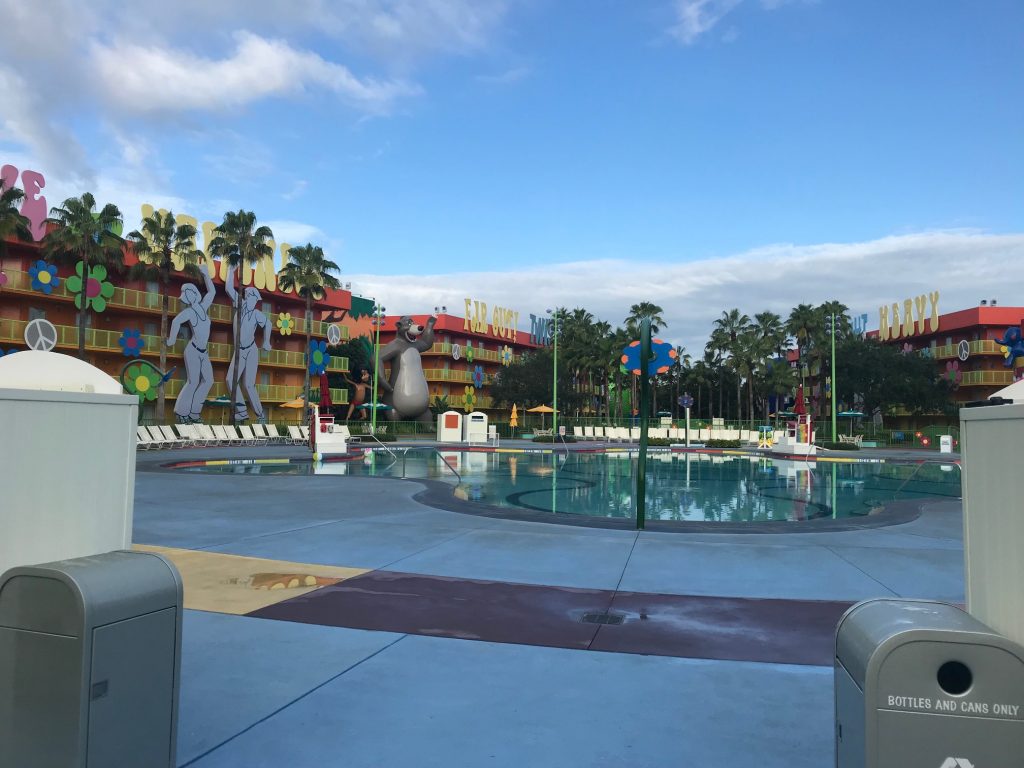 Like all the Disney value resorts, these pools don’t come with slides or hot tubs. They’re nicely heated — one lifeguard told me they keep them at a constant 82 degrees — but they will feel like a step down compared to other Disney properties. Their main purpose is to accommodate as many guests as possible, so sheer size takes precedence over extra pool amenities.

If you’re one of those pesky childless millennials at Disney World, you’re not likely to linger long at the Hippy Dippy Pool. Excitable children, lack of special amenities and the constant pool games make Pop Century’s feature pool a difficult place to relax. If you find a quiet area of the pool, it’s not going to stay quiet for long.

Loud children are, of course, an unavoidable feature of Disney hotels, but the value resorts’ spartan pools make the experience less appealing. You should expect to spend less time lounging around the pool at Pop Century compared to other Disney properties.

A key feature of Pop Century is the ease of transportation to the parks thanks to the Disney Skyliner station. Shared with the adjacent Art of Animation Resort, the Skyliner station provides easy access to Epcot and Disney’s Hollywood Studios.

The trip is much faster and more comfortable than traveling by bus, even with the Skyliner’s design requiring guests to switch lines at the Caribbean Beach hub station. During our stay, we experienced no operational difficulties like the infamous Skyliner accident from October 2019. 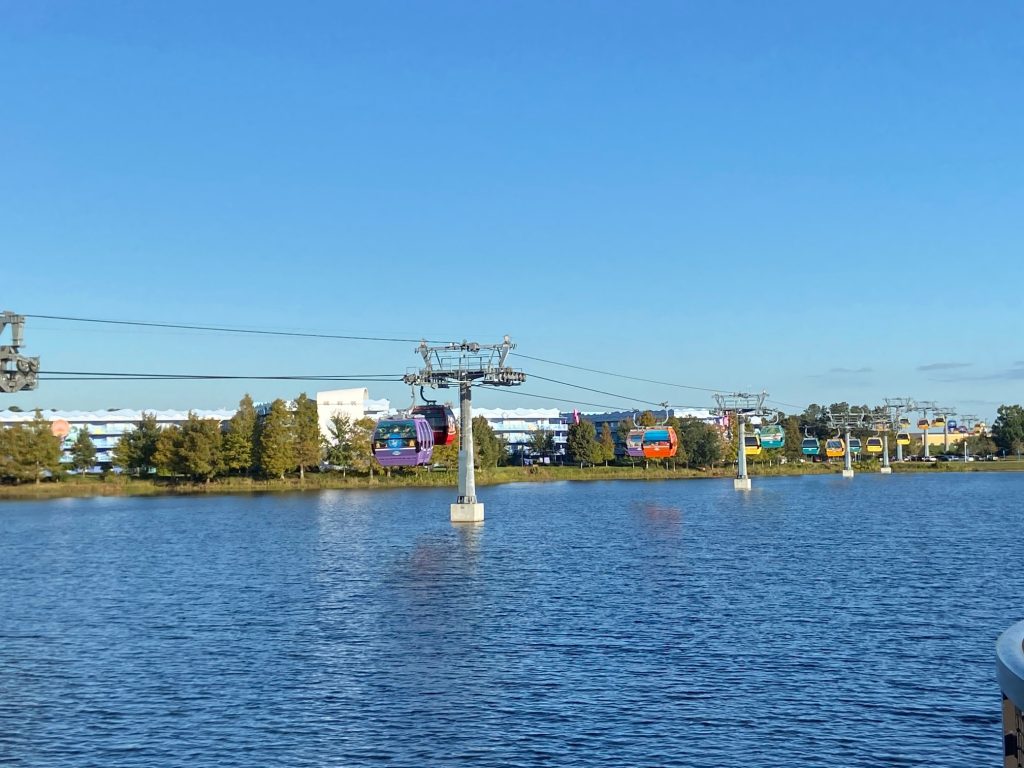 We requested a room close to the Skyliner station, resulting in trips as short as 15 minutes from our hotel door to a park entrance. If you plan on going to Epcot or the Studios during your stay, we highly suggest prioritizing proximity to the Skyliner. That goes double if booths at Epcot’s Food & Wine Festival are on your itinerary.

As for shopping, the retail section of the dual purpose Everything Pop offers the typical selection of Disney merchandise and sundries you’d find at other Disney resorts — only in a noisier setting thanks to being attached to the food court. There is a small selection of Pop Century-specific merchandise, mostly limited to shirts and tumblers. 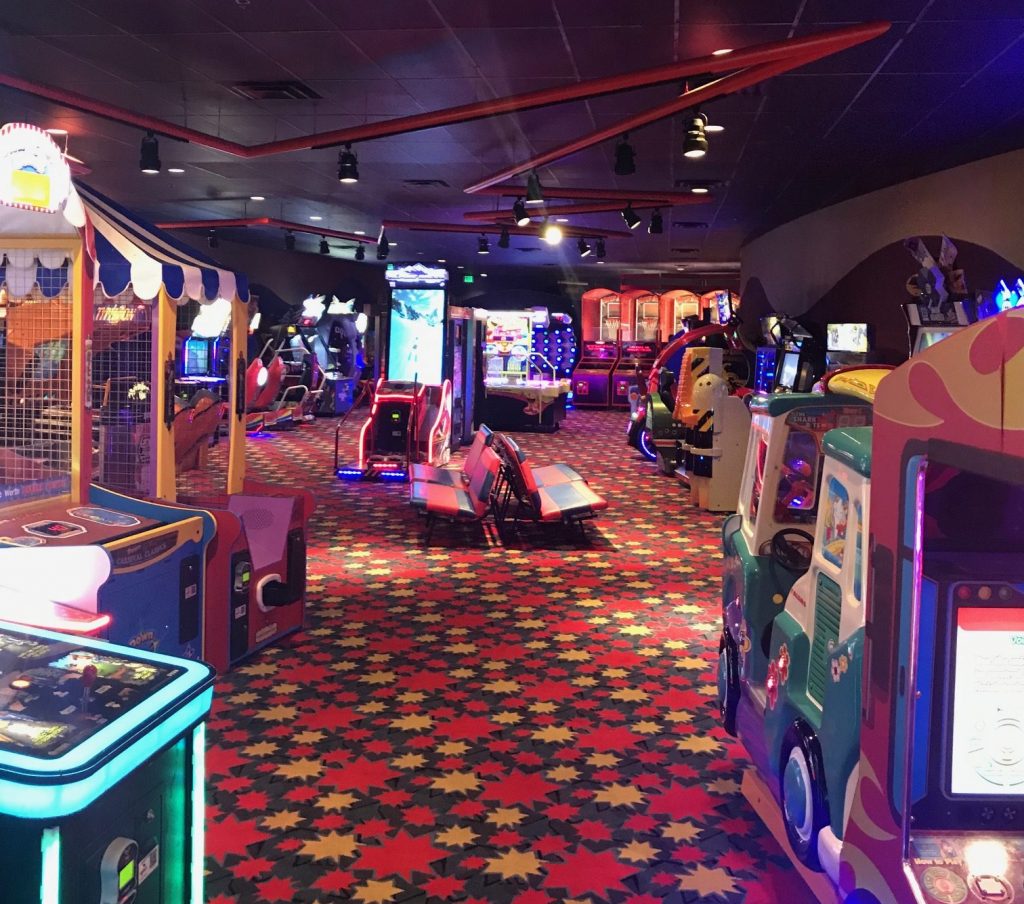 One of the best amenities you’ll find at Pop Century is the Fast Forward Arcade. The selection rivals your local Dave & Buster’s, sporting newer machines like the giant Space Invaders Frenzy to classics like 1998’s Star Wars Trilogy Arcade.

Fast Forward Arcade offers more than its counterparts at most Disney deluxe accommodations, while Universal’s newer value resorts don’t seem to be dedicating this much space to their own arcades.

The strengths of Disney’s Pop Century outweigh its weaknesses, with refurbished rooms and the easy transit provided by the Disney Skyliner offering guests the best value option for staying on-site at Disney World. Where it falls short is the overpriced food court and drab pool area.

If you want the most bang for your buck at a Disney World resort — but don’t plan on spending a lot of time at the hotel itself — Pop Century is the way to go.

RELATED STORIES:
5 biggest new theme park attractions coming to Central Florida in 2020
Disney gets a pass when companies cut ties with SeaWorld over animal welfare
Why Disney World isn’t getting a 5th park