With the loan, Clarke’s campaign now has brought in $262,111 and has spent only $5,280 of that, according to reports for the month of February posted by the Orange County Supervisor of Elections.

Clarke said false rumors circulated in February that he was preparing to drop out of the race. He called them lies, and said the rumors impacted his fundraising efforts. And he said that’s why he put in his own money, to demonstrate his commitment.

Besides the personal loan, Clarke’s campaign reported raising just $8,500 in February, the least amount of contributions he’s gathered in a month since his October entrance.

“There was a movement out there of people saying I was going to drop out of the race. It had an impact on the money we could raise. That’s one of the reasons I put that money in there, to shut them up,” Clarke said. 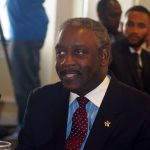 Reports show that Demings has now raised well over a half-million dollars through his official campaign and through his independent political committee, Orange County Citizens for Smart Growth, and the two funds finished February with a combined total of just under $500,000. Panepinto’s numbers are not yet in, but through January he raised about $360,000 through his official campaign and his independent political committee and finished January with about $250,000 combined in the bank.

In February, Demings’ campaign reported raising $31,875 through 80 individual contributions. That gave the campaign a total of $389,425 raised since he entered the contest in July, and $342,843 left in the bank at the end of the month. Demings’ political committee, Orange County Citizens for Smart Growth, reported raising $28,500 in February, bolstered by a $20,000 check from builder and Democratic donor Jim Pugh of Orlando. The committee now has raised $155,100, and finished February with $153,540 in cash.

Panepinto’s February reports have not yet been posted by the Orange County Supervisor of Elections. Going into February his official campaign had raised $245,832, including $100,000 he contributed himself, and had $201,147 in the bank. His independent political committee Vision Orange County had raised $116,649 through January, and ended that month with $50,333 in cash.