Warning: Use of undefined constant PWP_NAME - assumed 'PWP_NAME' (this will throw an Error in a future version of PHP) in /home/customer/www/orlando-rising.com/public_html/wp-content/mu-plugins/wpengine-common/wpe-sec.php on line 63
 Lauren Book: Controversial ‘Show Dogs’ sends disturbing message to kids — skip this at the box office - Orlando Rising
Home
Latest Opinion 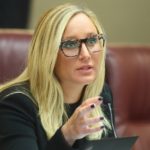 Recent controversy surrounding the soon-to-be-released movie “Show Dogs” makes it clear that sexualized content — made worse under the guise of humor — has no place in children’s movies.

I am extremely alarmed by reports that a character in the movie was instructed to essentially tolerate having their private parts touched, sending a disturbing message to young moviegoers.

Bloggers who attended an advance screening rightly called out Hollywood for the inappropriate content in a movie targeting children.

Show Dogs is about a police dog who goes undercover in a dog show to find a missing panda. Variety describes it as “’Miss Congeniality’ for dogs,” where the hero prepares to compete in a dog show by learning how to prance, show, and even stay completely still while his private parts are being inspected and touched — something he is alarmed about and does not wish to do.

The trainer explains this a natural part of showing dogs (and it is) and to go against his instincts by finding a “Zen place” as a distraction from the groping.

This has no place in a movie for children and parents should avoid taking their child to see it unless the scene is removed before its Friday release.

As parents, we know the influence media has on children. Our kids pick up behaviors and understandings from movies, YouTube videos and TV shows. Their minds constantly absorb the content with little to no understanding of the context.

In this case, it’s OK if someone touches your private parts because it’s part of the “show” and it’s just silly fun.

But it’s actually called grooming and is a frequent tactic used by predators to keep victims quiet, questioning their fear.

Child sexual abuse is a trauma experienced by an estimated 42 million people in the U.S. and the number grows daily.

One in three girls and one in five boys will be sexually abused before the age of 18, and 90 percent of these cases will be committed by a person the child — and their parents — know, love and trust.

Bravo to these self-described mama bear bloggers for sounding the alarm. From one mama to another, thank you.

I myself have not seen Show Dogs, but have read multiple reviews that clearly state this content in the movie.

If you were thinking about it, wait for additional information after opening weekend and make an educated decision about what is best for your children and family to help them stay safe. And if you do choose to take your children, use the opportunity to have a real and important conversation about listening to your guiding voice and speaking up when a touch or situation doesn’t feel right.

Reinforce that it’s ALWAYS OK to tell and seek help from a trusted adult.

Your kids have a voice — teach them to use it.