The $250-per-person fundraiser was headlined by Dyer, who appointed Mina to be the city’s police chief in 2014 and has already formally endorsed his sheriff’s candidacy; and Jacobs, who works hand-in-hand with the sheriff’s office, and offered her support to Mina Thursday night.

The two mayors, the top local officials from the Democratic and Republican parties, were joined by more than 60 other elected officials, political consultants, fundraisers, lobbyists and former officials, including the mayors of every Orange County city and most of its towns, at Mina’s kickoff fundraiser at the Dubsdread Ballroom Thursday night.

Mina is facing retired Florida Highway Patrol Chief Jose “Joe” Lopez in the contest for what will be an open Orange County sheriff’s position. Current Sheriff Jerry Demings is running for Jacobs’ job, Orange County mayor. He’ll have to resign, opening the sheriff’s job up for a special election. 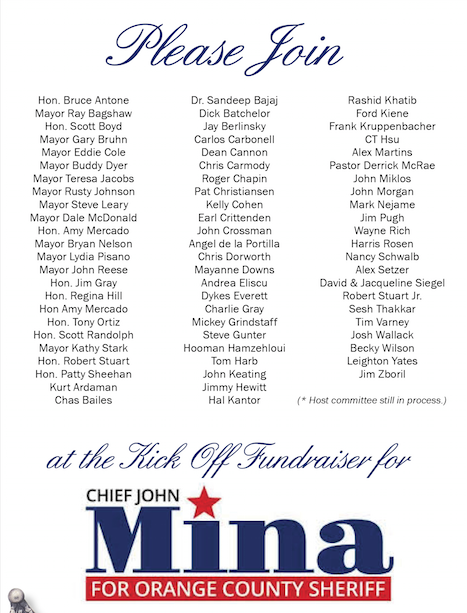