Democratic Gubernatorial candidate Gwen Graham alleged Friday that Gov. Rick Scott and his office could be partly to blame for the 14 heat deaths at a Hollywood Hills nursing home following Hurricane Irma after the Associated Press reported the facility called him three times seeking help.

The governor’s office quickly shot back, insisting that nursing home officials never advised that there were any dangerous conditions there, and that, nonetheless, state officials advised them that they should call 911 if any concern for the residents’ health did arise. And that never happened until later, when people started dying. 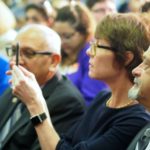 “Today’s report from the Associated Press makes it clear that 14 Floridians may have died and nursing home patients across the state were put at risk because of the Scott administration’s complete incompetence and neglect,” Graham stated in a written statement issued Friday afternoon by her campaign.

“There is no question the Hollywood Hills nursing home should have evacuated their residents as soon as the temperatures began to rise — but there is also no doubt the Governor’s Office or Rick Scott himself should have called 911 or ordered a wellness check as soon as concerns were raised,” she added. “He promised to take action and failed to follow through. The buck stops at the governor’s desk.”

Scott, the Republican whose final term ends this year and who is contemplating a run for the U.S. Senate, was in no way to blame for fatal neglect in the South Florida nursing home when not even the administrators in the home seemed all that concerned, his office replied. 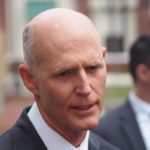 “At no point in time did this facility report that lives were in jeopardy or that conditions had become dangerous,” Scott’s Press Secretary Lauren Schenone replied in a written statement later Friday. “State officials told this facility to dial 911 if they had any reason to believe their patients were in danger, something every healthcare professional knows to do. The governor looks forward to the findings of this homicide investigation and continues to demand answers as to why this facility didn’t take the necessary steps to keep their patients safe.”

Hollywood city police are investigating the deaths as homicides cases.

The exchange between Graham’s campaign and Scott’s office was keyed by this week’s release of public records.

Prior to Irma’s Sept. 10-11 assault on Florida, Scott had given out his cell phone number to nursing home administrators and urged them to call him directly if they needed his help. In the days following the hurricane, The Rehabilitation Center at Hollywood Hills, like much of Florida had lost power and air conditioning, and heat increased inside. Fourteen residents died, apparently the result of hyperthermia.

Did Scott and his administration have any cause to think something was going very wrong there? Graham’s campaign in particular pursued that question with records requests, and on Monday the governor’s office released records of Scott’s cell phone.

The Associated Press, which received copies of those records, reported Scott’s cell phone got 120 calls from nursing homes and assisted living facilities, including three from The Rehabilitation Center at Hollywood Hills. The AP reported that Scott’s office said it responded to those calls. The AP also reported that Geoffrey D. Smith, an attorney for the center, suggested the the center’s administrators there may have been given false hope.

In a written statement, Smith told the Associated Press that the nursing home administrators who called Scott’s cell phone “felt assured that he would take decisive action to be sure that power was promptly restored for the AC when this was reported. It is difficult to know in hindsight what may have occurred differently if the governor had advised that he would not take any action. But the facility administrators would not have been instilled with the false hope that help was on the way.”

Schenone contended there was never any point when Hollywood Hills administrators suggested to state officials there was any danger. Nor did the home’s administrators show they felt anything was perilously by calling 911 themselves, or send anyone to the hospital right across the street, until the first deaths occurred on  Sept. 13. The others died after they were taken to the hospital.

Schenone told the AP that each Hollywood Hills call was returned and administrators said they had enough portable fans and coolers.

“No amount of finger pointing… will hide the fact that this health care facility failed to do their basic duty to protect life,” Schenone wrote in an email to the AP. “This facility is failing to take responsibility for the fact that they delayed calling 911 and made the decision to not evacuate their patients.”

The AP reported that most of the phone calls to Scott’s cell phone went to voice mail, and that Scott’s office responded later. There were no cell phone voice mails released. Graham’s campaign said they were told the voice mails had been deleted, though the campaign is seeking to see if they can be recovered.

Graham’s campaign contended that Scott’s office appeared to be hiding something, because it fought to keep the cell phone records secret, and that the campaign “had to fight tooth and nail” to obtain them, an effort that ended Monday with Graham signing a $1,200 check to pay for public record research expenses by the governor’s office.

“They have exposed how the governor’s office botched the response — but we still do not have the actual voicemails that were left and I will continue fighting for them until they are made public,” Graham stated in the news release.