The Monticello, Indiana park announced on Feb. 18 that it would be shutting down after 94 years in operation. Its parent company, Apex Parks Group, which bought the park less than five years earlier, , cited a lack of return on investments made in new rides at the park as the reason for the closure.

As fans hoped for a potential buyer to swoop in and save the park, Fun Spot America fueled rumors that it was looking at an acquisition.

In response to a comment on a Feb. 20 Facebook post, the official Fun Spot America account said CEO John Arie, Jr. went straight from an appearance on WESH-TV to the airport to fly to Indianapolis — which is about a 92-mile drive away from Indiana Beach. 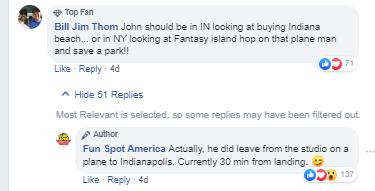 Fun Spot ended the speculation in a statement released Monday.

“We recently received an invitation to visit the park, review the facilities and attractions at Indiana Beach Boardwalk Resort. During the past few days, for some, waiting for an answer may have seemed like an eternity. We saw a park with rich history and heritage, that has created memories for generations. Unfortunately purchasing Indiana Beach or any park is not in our current master plans. We are going to pray for the proper owners and operators to become visible so that Indiana Beach may continue to serve their guests and community for many more generations.”

Fun Spot operates three parks in Orlando, Kissimmee, and Fayetteville, Georgia. All of those parks are smaller than Indiana Beach, which sported 43 attractions — including six roller coasters — at the time of its closing.

Locals aren’t giving up hope. County officials have stated that they are meeting with brokers and investors in search of a buyer, and fans have organized a “Save Indiana Beach” event for Saturday near the park’s entrance.

“I hope we can further inspire someone to purchase the park and save it,” Dustin Sprunger, one of the event’s organizers, told the Lafayette Journal & Courier.