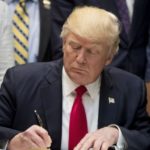 President Donald Trump has signed a declaration of a pre-landfall emergency for Florida, setting the stage for federal agencies to mobilize into the Panhandle and north Florida and assure federal funding for preparations and recovery before Hurricane Michael arrives.

Trump’s action, requested by Florida Gov. Rick Scott and supported by Florida’s U.S. Sens. Marco Rubio and Bill Nelson, authorizes the Federal Emergency Management Agency to identify, mobilize, and provide, at its discretion, equipment and resources necessary to alleviate the impacts of the emergency.

Debris removal and emergency protective measures, including direct federal assistance, will be provided at 75 percent federal funding in the counties of Bay, Calhoun, Franklin, Gadsden, Gulf, Hamilton, Jackson, Jefferson, Leon, Liberty, Madison, Suwannee, Taylor, and Wakulla, according to the release.

Scott’s office expressed the importance of those federal resources to help Florida prepare for anticipated impacts from Hurricane Michael, including the threat posed by the forecasted 12 feet of storm surge.

On Sunday Scott declared a state of emergency in 26 Florida counties, and expanded it to include 35 counties total on Monday.