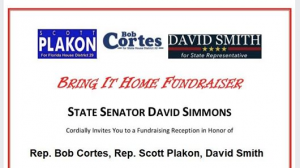 Democratic gubernatorial nominee Andrew Gillum has been riding that catch-phrase all year, drawn from stories about his grandmother and turned into a campaign theme for his vision for Florida. Gillum hopes it will be to him what Let’s Get to Work has been for outgoing Republican Gov. Rick Scott.

So it was a little odd, appearing, as it did Friday morning, on a Republican fundraiser announcement.

“Bring It Home Fundraiser,” the notice opened, as it appeared on Facebook.

Above it: the names Scott Plakon, Bob Cortes, and David Smith. Below it: state Sen. David Simmons.

The announcement, that the Republican Simmons was hosting an Oct. 30 fundraiser for the re-elections of Republicans Plakon and Cortes and election of Smith to the Florida House of Representatives for Seminole County’s Districts 29, 30, and 28, respectively.

Someone made a mistake.

Plakon laughed for about 20 seconds when informed that he had posted a fundraiser notice on Facebook that borrowed Gillum’s signature phrase.

“Scott uploaded the wrong version,” Cortes said. “That was an earlier draft that Scott had, that we did not approve. We were not going to use, obviously, Gillum’s tagline.”

The announcement was drafted by a consultant and sent to the trio of candidates. Plakon uploaded it to the internet, while the other two sent it back with nope-try-again directives. The new version came back later announcing it would be the “Last Push Fundraiser” for Plakon, Cortes, and Smith.

Later Friday morning Plakon swapped in the correct version in his internet posts.

“I can only speak for myself: I had no idea Andrew Gillum is doing that,” said Plakon, a little embarrassed but still laughing. “I’m busy running my own race.”

Gillum’s campaign did not respond to a Florida Politics inquiry about what it thought of Republicans, at least briefly, borrowing his signature phrase.