Florida’s Democratic Sen.Bill Nelsonbid adieu to his colleagues in the U.S. Senate Wednesday afternoon but vowed to not leave public life, a pledge warmly welcomed by other senators starting with Florida’s Republican U.S. Sen. Marco Rubiowho said he will be remembered as a giant.

In a 30-minute speech from the floor of the U.S. Senate, Nelson recalled accomplishments and struggles of grand scales, such as the 2009 passage of the Affordable Care Act and modernization of America’s space program, and on intimate scales, such as efforts on behalf of missing federal agent Bob Levinson and Florida Army veteran Sam Snow.

For Florida, he called on the Senate to continue bipartisan efforts to oppose off-shore drilling, to support efforts to restore the Everglades, provide relief from hurricanes, support Puerto Rico, and to support space exploration and the commercial space industry.

Yet Nelson also cautioned “setbacks temper the successes,” chiding efforts to disenfranchise voters, and bemoaning the effect the Citizens United decision had on money in politics.

He implored the Senate to practice civility, humility, moral courage, justice, and respect, to insist on truth, and to uphold law.

Nelson is leaving after losing re-election to a fourth term on Nov. 6 to Republican Gov. Rick Scott. The sometimes brutal campaign and its airtight narrow ending were not mentioned, nor did Nelson offer any regrets or misgivings, except in broad condemnations of what he declared to be the rise of partisan acrimony and tribalism.

“To the people in America, you in this Senate must be a beacon of light in a time when it seems that darkness is increasingly gathering in our politics. You must remember that your voices and your actions will face and help shape the future. You have the power to make our discourse more civil and to create change,” Nelson said.

He made no overt references to PresidentDonald Trumpor the investigations or speculation for possible impeachment, but Nelson hinted at the possibilities facing the Senate, and he urged the chamber to demonstrate its independence from the executive branch.

“We must uphold the rule of law, and in doing so we must we must affirm that no one person is above the law. There are great many challenges that our country faces and I call upon all of those who serve in this Senate to act with moral courage when these obligations come calling in the future,” Nelson said.

Without specifying, Nelson vowed he was not going away in politics, for a career that began in 1972 and has gone largely uninterrupted for 46 years. 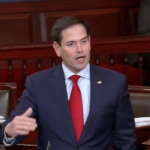 Nelson’s farewell drew several other senators from both parties to rise to say goodbye, including Rubio and another Republican, Texas’s U.S. Sen. Ted Cruz.

Rubio said Nelson was a man of humility, compassion, and decency, and a man who knew “every nook and cranny” of Florida because he had been there.

“When the history of Florida politics as it is written, the name Bill Nelson will be among the giants of Florida political history. For few who have ever served at any level have done more for longer in service of the people of the Sunshine State than the senior Senator, who moments ago bid his farewell, in a chamber where he has done so much good for our state, for our nation, and for the world,” Rubio said.

Cruz spoke of his partnerships with Nelson in support of NASA and America’s space industry, in crafting and passing two key bills for the future of space, the 2015 Commercial Space Bill, and the 2017 NASA Authorization Bill. Cruz also recalled when Nelson and his wife Grace Nelsoninvited the new Senator from Texas over for dinner in 2013, ignoring partisanship and striking a friendship that became strong and lasting.