This is the first in an ongoing series about pieces of Central Florida’s theme park history that live on inside fans’ homes or private collections. Have your own to show off? E-mail us at johngregoryFL@gmail.com!

Whenever a Universal Orlando attraction closes, pieces of it will likely end up in the Williams of Hollywood prop shop at Universal Studios Florida.

“I liked some of the bigger props at Universal Studios, but never seriously considered buying any of them until I found the Earthquake door,” Davidson said.

What he brought home dated back to Universal Studios Florida’s opening day: a door labeled “HIGH VOLTAGE” used  in the subway station finale of opening-day attraction Earthquake: The Big One and its successor Disaster.

If you rode either of these rides, this was the electrical panel which began sparking and then swung open as the tremors began, just next to the turnstiles and the Embarcadero Blossoms shop facade. As the shaking continued, the door would be covered up by the signature thrill of the ride: the street collapsing into the subway station, leaving a gas truck tumbling down towards you.

While little changed with the final scene as far as the door was concerned, Davidson prefers to remember the ride during its “Earthquake” incarnation—from the Charlton Heston pre-show to the effects-laden finale. Considering the ride had been altered from its original concept, he wasn’t sad to see it go when it was shut down.

“I was never a fan of Universal changing Earthquake into Disaster anyway, so when I heard it was closing I was not terribly upset about it going away,” he said. “I never liked how they changed the final earthquake scene into a movie shoot with lights and cameras mounted in the cars and someone over a speaker giving instructions for how to react.”

He did get to ride it one last time before the scene went away for good on Sept. 8, 2015 to make way for Fast & Furious: Supercharged.

It wasn’t until December 2016 that Davidson spotted the door in Williams of Hollywood. It stuck out to him not only because it was part of the Earthquake finale, but because of his own tinkering with electricity.

He’s an electrical engineer and counts building Tesla coils among his hobbies—making a “HIGH VOLTAGE” electrical panel a pretty fitting present for himself. Never having considered buying any of the bigger Universal props, he said he was tempted, but ultimately thought it was “a bit unnecessary.”

Fast forward to February 2017, and he’s  back in Universal Studios Florida—and the door is still there. He said this time, he felt like he had to have it. His wife agreed, having liked the Earthquake ride herself. 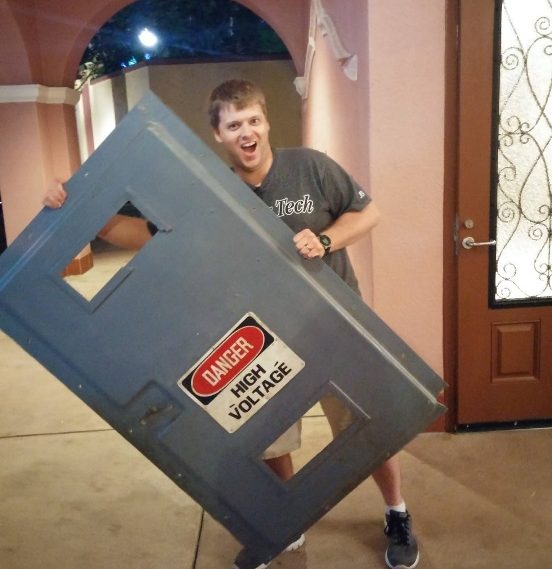 Now the only problem was getting the door out of the park. Davidson had Williams of Hollywood send to the package pickup at the front entrance. From there, it was up to him to get it home, making him a “slightly awkward” sight walking back to the parking garage.

“As I walked through CityWalk to the parking garage with this huge door that was larger than me, every single security guard stopped us to ask what we were doing and where we got it from,” he said. “I had to keep telling them ‘I have a receipt for this,’ and they’d give us a strange look and say ‘Oh… um. OK.’ and wave us forward.”

Once he was done confusing people in CityWalk, he had to decide how to best display his new decoration. The door needed a good amount of wall space and a bit of TLC, as the angled slats had rusted out over the years from fog effects within the ride.

Davidson took measurements and was able to find replacements for those pieces, painting them himself was then attaching it with magnets so he wouldn’t be altering the door himself, though the actual panel is made of plastic, not metal. A piece of plywood on the back and a picture hanging wire later, and the Earthquake door had found its new home. 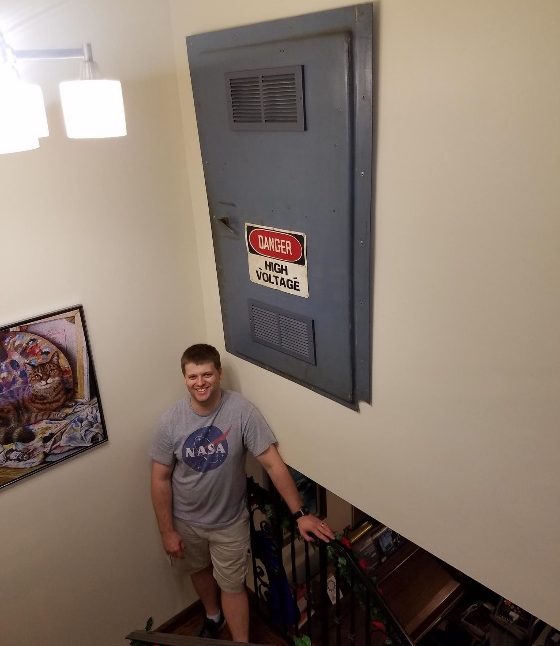 Unless Davidson moves out west, this door has seen its last earthquake (Photo provided to Orlando Rising)

You may have thought having such a storied theme park prop would be among the best conversation starters imaginable. Alas, Davidson’s family isn’t too impressed.

“They just thought it was typical that I would get something like that because of the high voltage theme,” he said.

As for making the Earthquake door part of a bigger prop collection, Davidson said he doesn’t have any immediate plans to make another purchase from Williams and Hollywood. If he could have his pick from any past or present Universal attraction, he said he’d choose another ride which was substantially altered in the late 2000s.

“I would love to have something from Dueling Dragons, he said, “such as one of the fiberglass cowlings from the fire coaster train or maybe the test seats that were in front of the entrance.”

Editor’s note: This story was originally published by the same author on the Unofficial Universal Orlando Podcast Blog.

Correction: An earlier version of this article misidentified the subject’s last name in a photo caption.