If you walk into the Orange County Convention Center this week, you’d forgiven for thinking you’re in an indoor theme park and arcade rather than an trade show.

Tuesday was the first day the show floor was open at the International Association of Amusement Parks and Attractions (IAAPA) expo, with companies ranging from popcorn vendors to carnival ride operators to roller coaster designers shopping their wares to more than 35,000 professionals working in the theme park industry from over 100 countries.

SeaWorld Parks & Entertainment attracted the most attention as it hyped up 11 rides opening across its parks in 2019. Several of those are coming to Orlando — particularly the re-themed attractions in its Sesame Street area — but at the booth for Orlando-based Skyline Attractions, the focus is on the Tidal Twister roller coaster coming to SeaWorld San Diego next year. 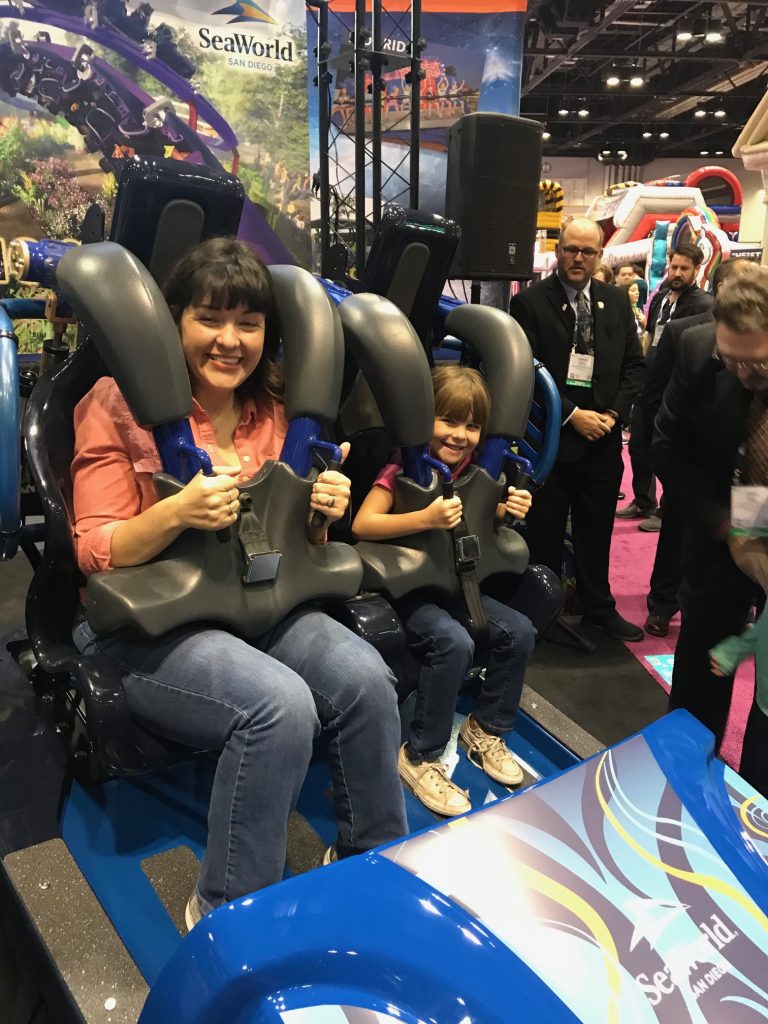 A dueling roller coaster designed like a figure-8, it will hit max speeds of 30 miles per hour, but also feature “a zero-G roll” in its center

“You’re going to crisscross the other trains,” said Jeff Pike, president of Skyline Attractions. “You’re going to see the screams and the smiles of the families that are riding opposite you.”

A look around the show floor near Skyline’s booth shows the variety of attractions big and small showing off at IAAPA. Just across from the Tidal Twister car were bouncy houses from California-based i2k Inflatables — some with interesting themes. 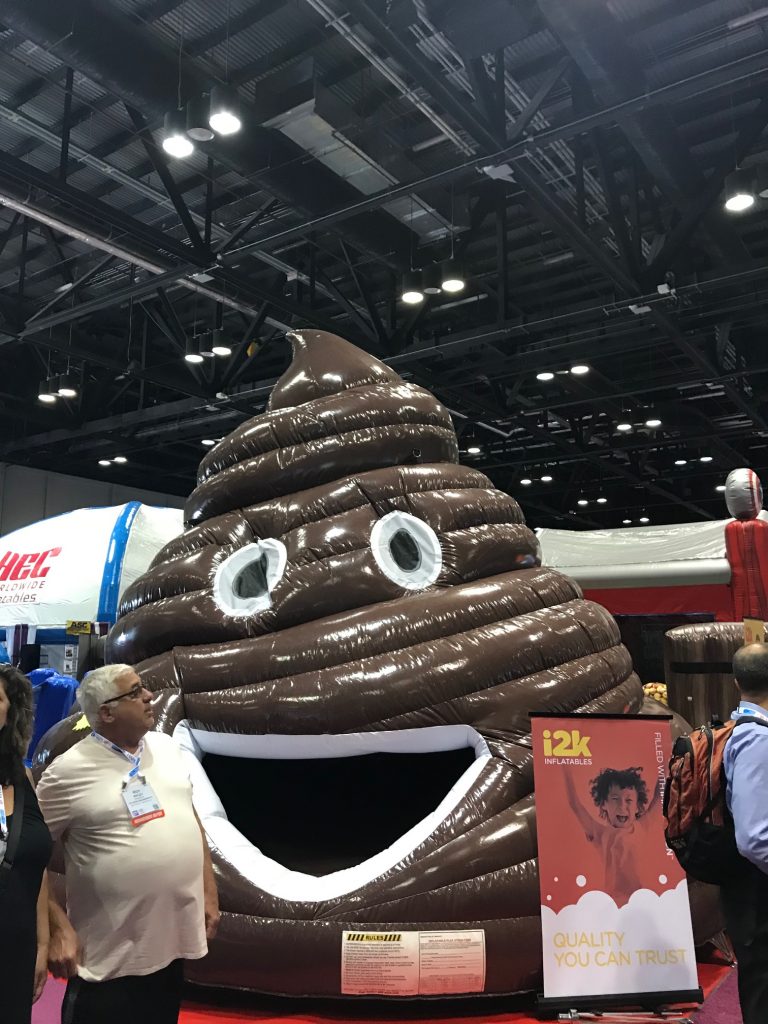 Baltimore-based Premier Rides also took part in the show’s SeaWorld-dominated Tuesday. The company is the manufacturer behind the Tigris launch coaster coming to Busch Gardens Tampa next year. It didn’t have a full-size ride vehicle on display, but rather than a cake version of the coaster trains. 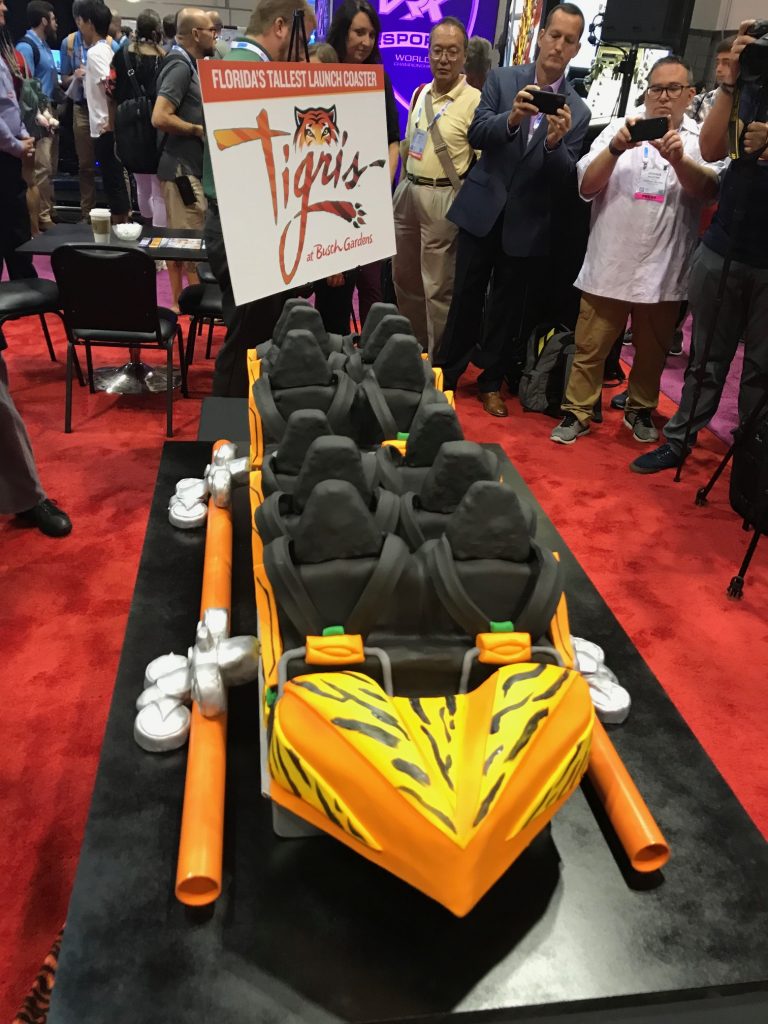 The non-edible version of Tigris opens in 2019

There was a major Sesame Street presence on Tuesday. SeaWorld brought out several characters such as Elmo, Abby Cabaddy and Grover to hype the Sesame Street section opening at SeaWorld Orlando in 2019. 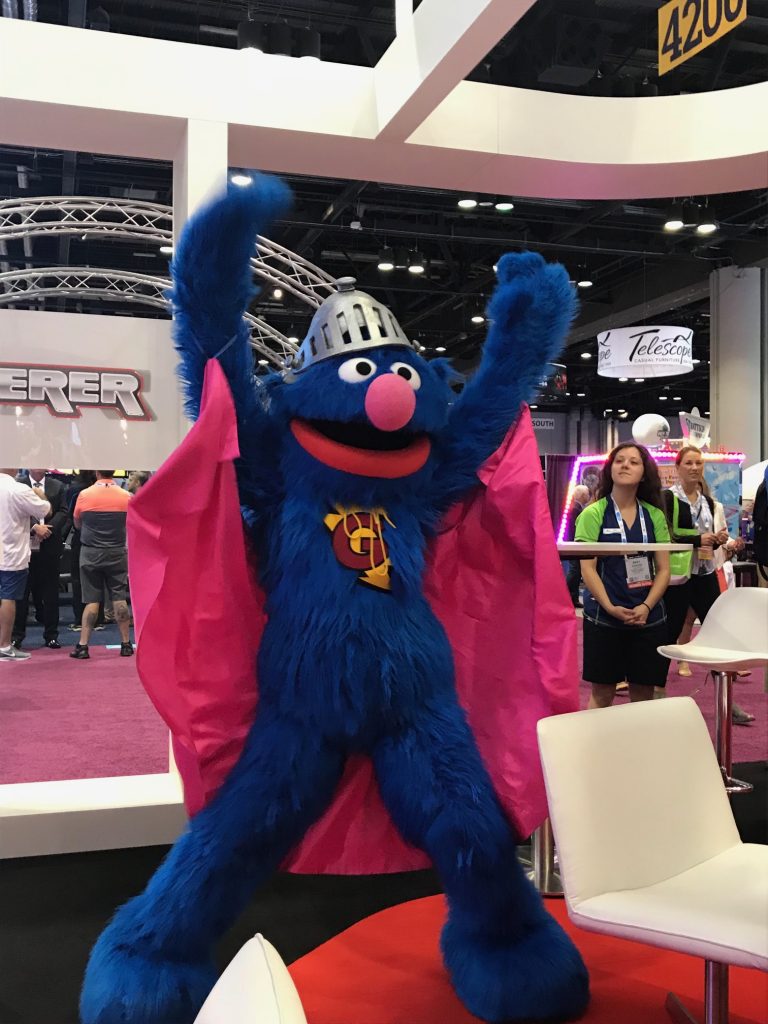 But Sesame Street was generating buzz without SeaWorld’s help, too. The Jacksonville-based Sally Corporation, known for working on animatronic-based dark rides like Universal’s ET Adventure, announced along with the Sesame Workshop that it would be working on a new Sesame Street-themed dark ride for PortAventura World in Spain. 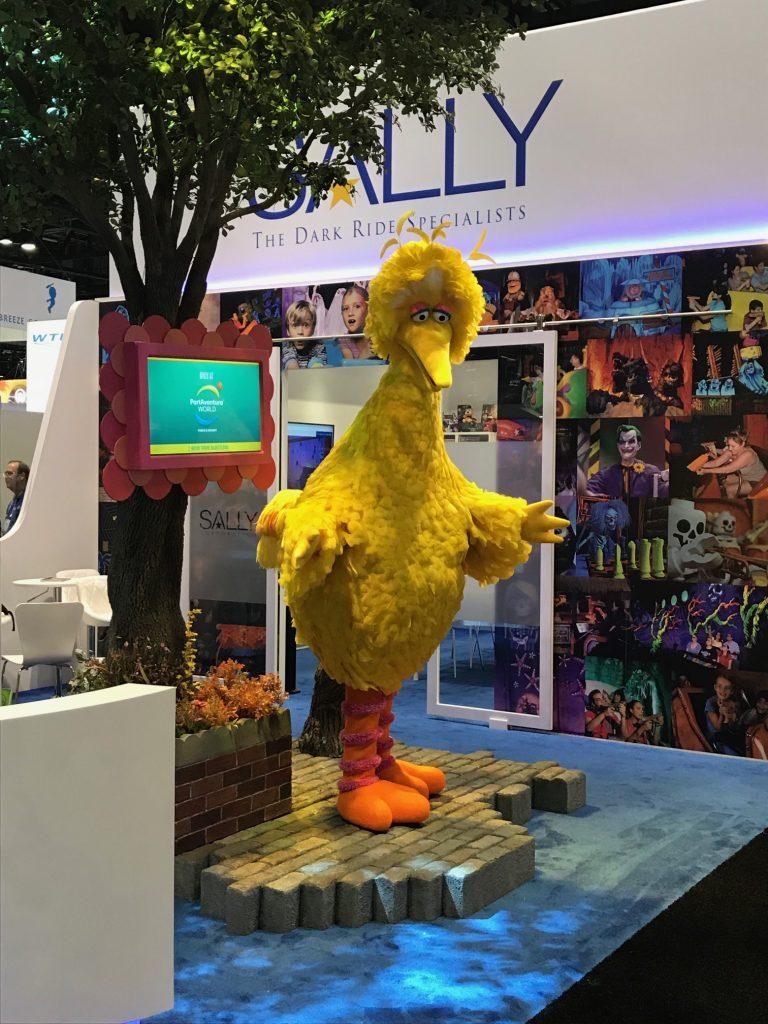 This Big Bird animatronic was built by Jacksonville’s Sally Corporation

“Fans from around the world are going to be able to experience a Sesame Street like they’ve never experienced it before,” said John Wood, chairman and CEO of Sally Corporation.

The six-minute ride will have guests working to solve a mystery on Sesame Street, with more than 2,000 “clues” to collect.

Beyond big attractions, a significant portion of show floor dedicated to arcade games. 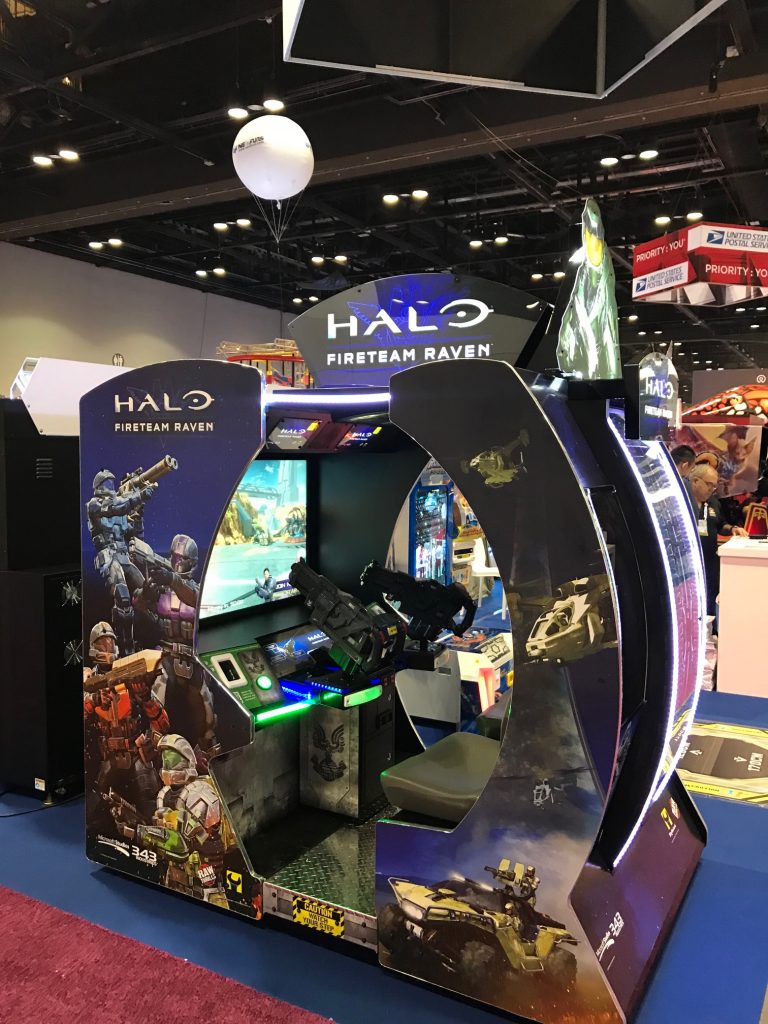 Halo: Fireteam Raven, a co-op arcade version based on the mega-popular Xbox franchise, was available in two- and four-player versions at multiple booths. Video game fans may recognize major video game companies like Atari and Sega displaying their newest arcade games at the show.

While there are plenty of kinetics around the convention center — including fully operating carnival rides — at least one booth was turning heads without having anything moving. Madame Tussauds Orlando unveiled its wax figure of Jason Momoa as Aquaman, which will be added to its collection of DC Comics heroes on December 4. 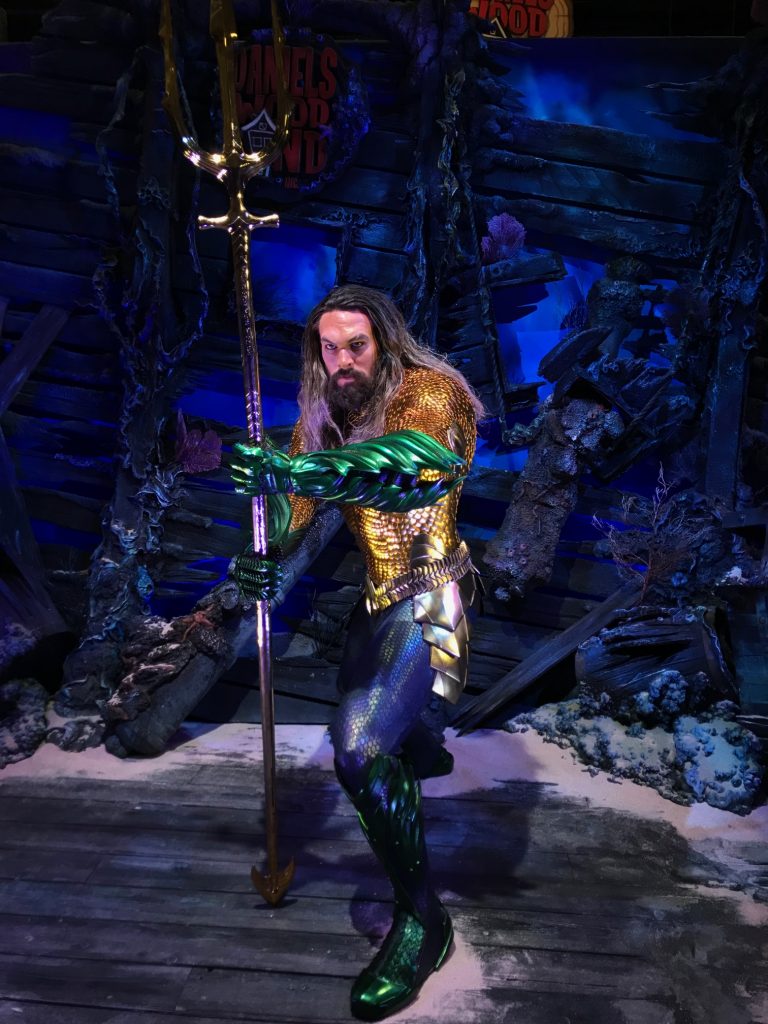 The IAAPA expo runs through Friday within the North and South buildings of the Orange County Convention Center.