Dozens of media outlets were invited to the under-construction Star Wars: Galaxy’s Edge at Disneyland, offering the most in-depth look yet at the land coming first to Anaheim and then Walt Disney World later this year.

While the version of Galaxy’s Edge being built at Disney’s Hollywood Studios will feature two exit/entry points instead of three, it’s otherwise expected to have an identical layout and amenities for guests. Here are five of the most important tidbits fans should know from the press preview:

The idea of melding theme park design with video games is nothing new for the industry as a whole or for Disney. Star Wars: Galaxy’s Edge, however, aims to go beyond creating a shooting game like Buzz Lightyear’s Space Ranger Spin or Universal’s Men in Black: Alien Attack, and provide greater interactivity both in and outside the attractions.

Millennium Falcon: Smugglers Run, one of two attractions coming to the land, will feature six guests taking on different roles in piloting the famous ship. 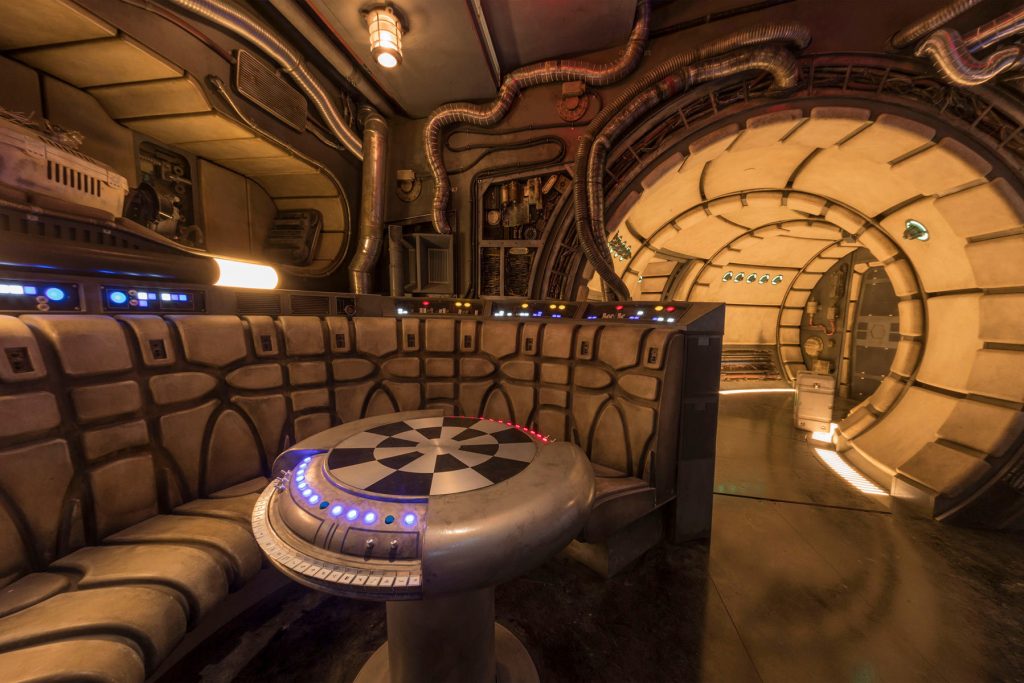 While Disney emphasized no one’s action will result in an abrupt and unsatisfying ride experience, guests’ actions will matter.  The Los Angeles Times compared it to the mobile game “Spaceteam,” emphasizing communication “and silliness” between the team in your cockpit. The ride was developed using Unreal Engine, a popular game development toolkit used for video games ranging from Tekken 7 to Gears of War 4.

Outside the rides, Disney wants to encourage exploration and interaction throughout Black Spire Outpost, the fictional locale of Galaxy’s Edge — but only to a point.

“When we’re all playing a video game or something, we may make very extreme choices,” Scott Trowbridge, the Disney Imagineer in charge of development at Galaxy’s Edge, told the Times. “We’re playing with different versions of ourselves. Some people want to do that when they come to the parks too. They might want to explore a side and play the role of a character. It’s amazing how many people want to play as a Dark Side character. It’s great to exercise that side of our personality. But not everybody wants to do that when you’re with your family or with grandma.”

2. Rise of the Resistance will be huge

The ride portion of Star Wars: Rise of the Resistance will not be 28 minutes long, a widely-reported misconception based on other sites incorrectly quoting Alicia Stella of Orlando Park Stop. Bob Chapek, head of Disney’s parks division, did call it “the longest attraction we’ve ever developed with a ride vehicle.”

Beginning in a Resistance base near Black Spire Outpost, guests will be recruited for a mission that puts them inside a First Order Star Destroyer. In a first for Disney, guests will reportedly have to transfer ride vehicles in the middle of the experience. Elements of the ride include facing 50 stormtroopers after your shuttle is caught by the First Order.

While Disney is emphasizing the tactile experiences in Galaxy’s Edge, screens will be involved in Rise of the Resistance, with characters like Rey, BB-8, Poe Dameron and Kylo Ren making appearances. 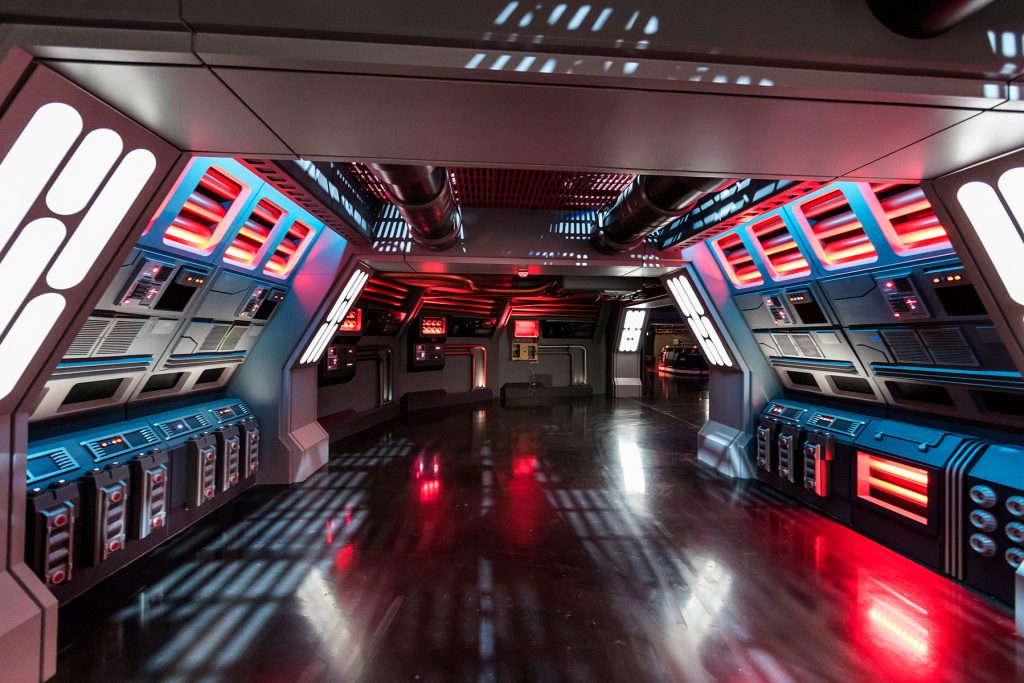 Inside a Star Destroyer in Star Wars: Rise of the Resistance (Joshua Sudock/Disney Parks)

3. Merchandise will be different than other Disney parks

Galaxy’s Edge will have nine main merchandise locations. Items will vary by location, including separate clothing stands that sell Resistance gear and First Order clothing in both sides’ sections of Black Spire Outpost.

The storytelling will extend inside the shops. Getting a lightsaber from Savi’s Lightsabers — something done quietly so as not to attract the First Order’s attention — will cost nearly $160 for both the blade and hilt through an experience involving shop workers called The Gatherers.

“They have dedicated their life to balancing the Force through sharing their knowledge of it,” Brian Loo, a Disney Imagineering creative producer focused on merchandise, told Entertainment Weekly. “In this experience, our guests will go on a guided tour with the Gatherers to build their lightsaber.”

Other shops will sell items like customizable droids and lightsabers (no blasters, though, per Disney’s no selling guns policy), but you won’t find generic merchandise that says “Disney” or “Star Wars” on it.

In one of the more surprising revelations from the press coverage, Gizmodo’s io9 said Star Tours would not be closing in either Disneyland or Disney’s Hollywood Studios after Galaxy’s Edge opens or be moved nto the new section.

On both coasts, Star Tours is disconnected from Galaxy’s Edge, both physically and in storytelling terms, as the ride has always jumbled together Star Wars timelines, in contrast to the new area’s stricter adherence continuity. For Disney World, the ride was expected to remain in place for at least a year after Galaxy’s Edge opened just to give guests something else to do in the park.

Having capacity available for guests with attractions and show across both parks will be key when Galaxy’s Edge opens. Disney has repeatedly said it’s aware of the huge demand to see the land from both “Star Wars” fans and its own set of diehard Disney park lovers.

“It’s not lost on our operators that [demand will be immense] and [this is] not the first time they have done something like this on either coast,” Trowbridge said,  according to The Hollywood Reporter. “We want you to come to this park and to this land and have a great time. If we make that a real pain in the ass to do, then you’re not set up to have a great time.”

Disney is being tight-lipped about its exact plans for managing crowds, however. In Disneyland, one strategy has been to try and thin out the huge number of annual passholders that could stream into the park on any given day by raising pass prices and increasing the number of blackout dates where they can’t gain entry. Price increases alone, however, have been unable to slow down attendance growth at Disney parks.

Another possibility discussed by media attending the preview is Disney charging money for Fastpass with Galaxy’s Edge. The Hollywood Reporter said company officials declined to say whether that was in their plans.