Survivors, family, and community members battered but not beaten by Florida’s two great recent tragedies met in Orlando Wednesday at Pulse nightclub, uniting in their grief, anger, determination and a frustration over how things do or do not change. 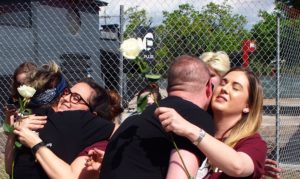 A busload of Parkland community members, including families of Marjory Stoneman Douglas High School students, came to pay their respects at the Pulse nightclub, and to share in their experiences both of and following the mass shootings of Feb. 14, 2018, and June 12, 2016.

These are not happy groups, but they were joyful to meet one another Wednesday, in the company of Orlando Mayor Buddy Dyer and former state Sen. Jeremy Ring, two Democratic politicians as closely affected by the massacres as any. Dyer oversaw much of Orlando’s response, coming out of it Orlando United. Ring is a Parkland resident, running for Florida Chief Financial Officer, with his campaign temporarily suspended since the school shooting.

The group, part of the much larger contingent that spent the past week in Tallahassee seeking legislative responses to the Douglas High School shooting, was not put together for any ideological positions, but at Pulse Wednesday their anger and frustration appeared widespread: angry that their community suffered another shooting, frustrated that many believe the Florida Legislature let them down.

Kim Bankoff of Weston, mother of three children in the school district, said many of the families who went to Tallahassee were generally pleased and some even excited by the proposals that Legislature leaders laid out to them Monday. Then, she said, hours later, in the middle of the night, they learned of the amendments coming in, and much of the support many felt was replaced by jadedness.

“Pass this or not we need to recognize this does not go far enough,” she said.

Ring, who spent much of the time with the group in Tallahassee and traveled separately to Orlando Wednesday, said of most of the members of the group, ‘They’re ticked off. They’re not happy.”

Ring said Bankoff’s frustration was caused because members of the Florida House had explained their bill Monday night and then changed it, making the Parkland community members feel deceived.

He said he understands the processes and politics, but the desperate families who came to Tallahassee were caught completely off-guard, and left aghast.

The 25 or so Parkland community members who came to Pulse met with about a dozen Pulse survivors and family.  Up until a few days ago they would have been able to make an intimate visit to what had become a makeshift shrine to what, until the Las Vegas massacre last summer, had been the country’s worst mass murder in recent history. But they had to get together outside a new, eight-foot, mostly-tarped fence surrounding the Pulse nightclub in Orlando, a barrier erected only last weekend to allow for construction of an interim memorial. 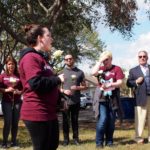 As both Parkland and Pulse community members placed single white roses into the fence, Luciel Tschumy, an LGBTQ transgender female activist from Broward County, read the names of the 49 people murdered at Pulse, punctuating her reading with anger for the lives cut short. “We’re standing here putting 49 roses. We shouldn’t have to freakin’ be here!” she exclaimed.

Margate Elementary School teacher Monique Wilson read a poem she wrote expressing deep frustration and anger. “Honestly America? What’s a parent to do, when a child is stripped from you?” she read. “So much change is needed, America, we’ve needed it for such a long time.”

Dyer sought to unite the groups, and pledged Orlando’s support. “We love you. We feel your pain. We want to do everything that we can to help you,” he said.